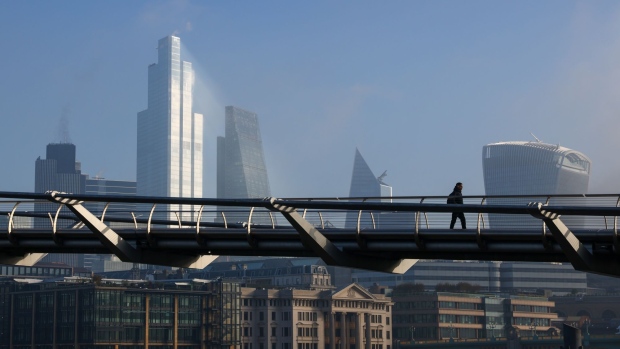 A pedestrian walks across the Millennium Bridge in view of skyscrapers in the City of London, U.K., on Thursday, Nov. 5, 2020. The Bank of England boosted its bond-buying program by a bigger-than-expected 150 billion pounds ($195 billion) in another round of stimulus to help the economy through a second wave of coronavirus restrictions. Photographer: Simon Dawson/Bloomberg , Bloomberg

(Bloomberg) -- Most of the world’s largest banks and asset managers are failing to set concrete climate targets for 2030, raising concern that global finance is kicking the can down the road when it comes to greening the industry.

Just 11 of the 30 biggest publicly traded financial companies have set reliable goals for slashing greenhouse gas emissions across multiple sectors by the end of the decade, according to climate researchers at InfluenceMap. That contrasts with all-but-one having signed up to the Glasgow Financial Alliance for Net Zero, or GFANZ, which commits them to such goals. At the same time, all are still members of industry associations that have lobbied to weaken sustainable finance policies in the European Union, the U.S. and the U.K., the report said.

“There is a stark disconnect between what they say about climate change and what they’re actually doing,” said Eden Coates, a senior analyst at InfluenceMap. “If they are serious about achieving their net-zero targets, they should set concrete and actionable short-term targets across all aspects of their operations.”

The findings highlight that while most financial institutions have set net-zero goals for 2050, not enough is being done in the near-term to combat emissions embedded within banks and fund managers’ financial activities. As the environmental, social and governance investment movement has boomed in recent years, so have accusations of “greenwashing” where companies provide misleading details about their products’ environmental credentials.

For example, only seven of the 30 institutions have plans to exit the thermal-coal business that are in line with the goal of limiting global warming to 1.5 degrees Celsius, and Barclays Plc, BNP Paribas SA, ING Groep NV and Societe Generale SA are alone in committing to reducing their oil and gas exposure by 2025, the report said.

InfluenceMap said that all companies were offered the opportunity to review the analysis and provide feedback prior to the report’s release.

The latest analysis of the financial industry comes about a month after the United Nations’ Intergovernmental Panel on Climate Change gave its bleakest assessment yet about the pace of climate change, warning that the private sector isn’t doing enough to avert a catastrophe.

Banks have helped provide about $4.1 trillion of financing to the oil, gas and coal sector via loans and bond sales since the Paris agreement was reached at the end of 2015, according to data compiled by Bloomberg. That includes almost $656 billion last year.

InfluenceMap said only a few companies, including BNP Paribas, Axa SA and Allianz SE, have been “engaging positively” on sustainable finance.