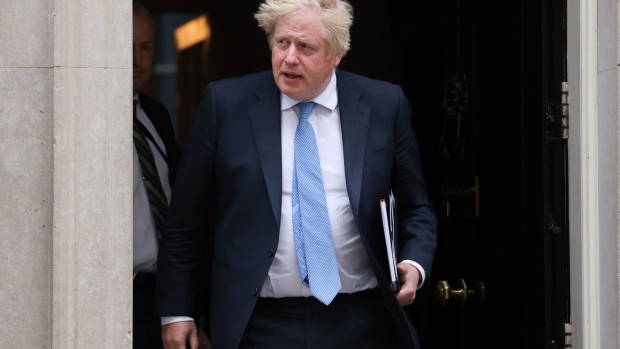 (Bloomberg) -- Boris Johnson didn’t use a meeting with a top civil servant to try to influence her report about illegal parties held at the center of government during the Covid-19 pandemic, said Education Minister Nadhim Zahawi.

Sue Gray is expected to release her report this week into what the UK media has dubbed “partygate,” a scandal that’s dogged the prime minister’s administration for months and almost ended his political career.

Johnson received one of the more than 100 fines issued by police for violations of lockdown rules over the gatherings. Gray’s report is expected to shed more light on how aware senior government officials were about breaching the restrictions they’d imposed on the public.

“The prime minister does not, did not and would not ever intervene in this report,” Zahawi said Sunday on Sky News.

Zahawi repeatedly declined to say who initiated the meeting between Johnson and Gray that was first reported by Sky on Friday. Johnson’s office and Gray’s spokesman each denied organizing the briefing, Sky reported.

“The important thing to remember is that Sue Gray has been able to go wherever the evidence takes her,” he said.

Gray’s report was long seen as the likely moment of maximum peril for Johnson, when the full scale of law-breaking -- and crucially, the level of his own knowledge and involvement -- would be laid bare.

Many of Johnson’s Conservative Party critics said they would wait for the outcome of the probe before deciding if they still wanted him as leader. “Waiting for Sue Gray” even became a Westminster punchline.

That was before the police decided, belatedly, that they would also investigate the allegations. Gray was forced to release interim findings, which were damaging but not terminal for Johnson. In the following weeks Tory attention has shifted to Russia’s invasion of Ukraine and the UK cost of living crisis.

The moves against Johnson dissipated, and even when the police did fine him -- for a gathering on his 56th birthday -- thus making him the UK’s first sitting prime minister found to have broken the law, it didn’t trigger a rebellion.

That’s likely to remain the case this week, especially after Johnson escaped further punishment for his attendance at other gatherings -- and despite other officials at the events receiving fines.

“The government will hope they can just ride it out,” Alice Lilly, a senior researcher at the Institute for Government think-tank, said in an interview. “It doesn’t feel as though there’s any imminent risk to the prime minister.”

Yet there’s still the potential for Gray’s report to hurt the prime minister, even if the risks take longer to play out. Much will depend on the level of detail the civil servant goes into, whether she includes names, and especially if reports that she has photographic evidence prove to be true.

Some of the more than 300 photos collected by Gray will likely be published, the Financial Times reported on Saturday, citing an unidentified official briefed on her work.

Images of parties and alcohol would again highlight the discrepancy between officials’ behavior during the pandemic and the sacrifices politicians asked of the public, even more so now that Britons face a squeeze on living standards due to rampant inflation.

Gray’s report will also include WhatsApp messages and emails showing that officials were warned they were breaking the law, according to the Times of London. About 15 people, including Johnson, will be named, the newspaper reported.

Johnson told reporters on Friday that it’s “entirely up to Sue Gray” if senior officials are named.

“It seems to me possible that members of the public who couldn’t visit elderly or dying relatives feel very strongly about the issue,” Vernon Bogdanor, professor of government at King’s College, London, said in an interview. “The Sue Gray report could still damage the government.”

Another risk for Johnson is if Gray’s findings contradict his various statements to Parliament and his overriding defense that he was either unaware of the lockdown parties or believed the gatherings complied with the rules.

Johnson Rides Out Anger at ‘Partygate’ as Tories Hold Steady

On Dec. 1, Johnson told members of Parliament that the pandemic guidance was “followed completely” at 10 Downing Street. He told Parliament two weeks later: “I certainly broke no rules.”

Making misleading statements to Parliament is conventionally seen as a breach of the ministerial code and cause for resignation. Johnson faces a separate parliamentary probe into whether he lied about “partygate,” and that inquiry will begin once the Gray findings are published.