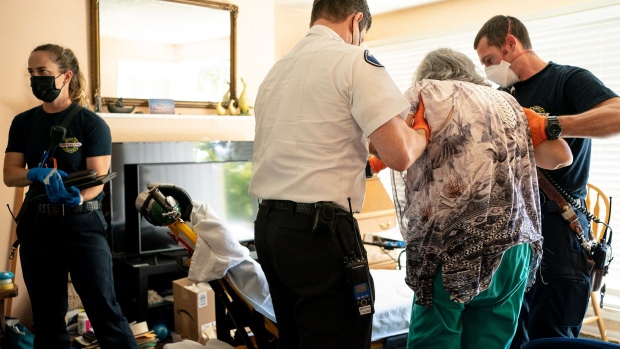 EMTs prepare to transport an elderly patient who may have had a stroke in Shoreline, Washington on July 26, 2022. , Photographer: David Ryder/Getty Images

(Bloomberg) -- Deadly floods are slamming the US Heartland. More than 2,000 miles away, dangerous heat is scorching the Pacific Northwest. The same phenomenon is to blame for both.

A massive bend in the jet stream -- narrow bands of high winds encircling the Earth -- is causing the havoc. In the Northwest, the jet steam has curved far north, allowing hot air to surge into Oregon and Washington. In the Midwest and Appalachia, it’s dipped south, bringing cool from Canada that’s colliding with with tropical air from the Gulf of Mexico, triggering ruinous downpours in Missouri and Kentucky.

“What goes up must come down,” said Jennifer Francis, a climatologist with the Woodwell Climate Research Center. “The strong northward bulge in the jet stream over western states responsible for the extreme heatwave in the Pacific Northwest is always coupled with a downstream southward dip.”

Wednesday’s deluge forced evacuations across Appalachian regions of Kentucky and West Virginia, killing three people, Kentucky Governor Andy Beshear said during a news conference. Flood warnings, watches and advisories are up across both states as well as parts of Virginia and Ohio. The worst of the rain has likely passed there, said Marc Chenard, a senior branch forecaster at the US Weather Prediction Center.

Earlier this week Missouri received a record 9 inches (23 centimeters) of rain in 24 hours, triggering floods that left at least two people dead. It was the most rain ever for the state, beating an old mark of 7.7 inches that fell in 1915 from the remnants of a hurricane.

“This has less than a 1 in 1,000 chance of occurring in a given year,” the National Weather Service said. The rain that drenched the Appalachians isn’t from the exact storm that set records in St. Louis and Missouri, but is being driven by the same larger pattern, Chenard said.

Chenard said the pattern will wander along into the weekend, with the next round of heavy rain shifting west into southern Missouri and Arkansas. With luck it will miss the areas drenched on July 25 and 26 around St. Louis that posted the records.

The overall sweep of the jet stream also pushed temperatures to 91 degrees Fahrenheit (33 degrees Celsius) in Seattle and could bring 100 to Portland, Oregon, Friday.