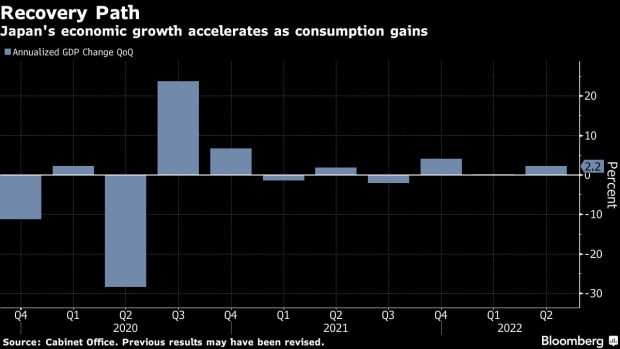 A worker checks a spool of recycled paper at a Corelex Shinei Co. toilet paper factory in Fuji, Shizuoka Prefecture, Japan, on Tuesday, Sept. 7, 2021. Japan's gross domestic product expanded at an annualized pace of 1.9% in the three months to June, faster than an earlier estimate of 1.3%, according to a revised report by the Cabinet Office on Wednesday. The figures showed extra government spending, business investment and private consumption buoyed growth. Photographer: Toru Hanai/Bloomberg , Bloomberg

(Bloomberg) -- The world’s third largest economy recovered to its pre-pandemic size in the second quarter, as consumer spending picked up following the end of coronavirus curbs on businesses.

Gross domestic product grew at an annualized pace of 2.2% in the second quarter of this year, coming in below the median estimate of 2.6%, Cabinet Office data showed Monday. That lifted the size of the economy to 542.1 trillion yen ($4.1 trillion), above what it was at the end of 2019. First quarter GDP was revised to an expansion from a prior contraction.

“The economy managed to return to its pre-pandemic size, but its recovery pace has been slower than other nations,” said economist Takeshi Minami at Norinchukin Research Institute. “I expect growth to continue in the third quarter too, but it will likely be losing momentum down the road.”

The end of pandemic restrictions on businesses in late March helped spur the economy. Consumer spending, which accounts for more than half of Japan’s economic output, led the growth, as did capital expenditure. The relaxing of Covid rules resulted in increased spending at restaurants and hotels, as well as on clothes, according to the Cabinet Office.

Still, the gains were more limited than expected a few months ago, showing that pent-up demand among consumers has been moderate.

“Going forward, we expect growth to slow in 3Q. Persistent cost-push inflation and a surge in new Covid-19 cases point to downside risks to the recovery. These will probably outweigh any boost from inventory rebuilding.”

While the economy regained its pre-pandemic size, economists expect the central bank to stick to its current easing policy, and the government to continue providing support for households hit by both the pandemic and rising prices. Other developed economies are doing the opposite by raising interest rates to cool demand and rampant inflation.

Japan’s milestone also comes behind the US’s, which recovered its pre-pandemic economy size a year ago, while much of Europe regained it at the end of 2021.

The report came out as downside risks mount at home and abroad. Japan has been reporting record Covid infection cases with daily numbers continuing to top 200,000 this month. The government has so far kept economic activity as normal as possible without bringing back restrictions. But high-frequency data suggest people’s mobility is falling.

In Japan’s key trading partners, growth is slowing as the US and Europe fight inflation and China sticks to its zero-Covid policy. The war in Ukraine continues to disrupt food and energy supplies while the crisis in Taiwan is adding to geopolitical risks.

Inflation remains relatively moderate in Japan, but consumption may cool with prices rising faster than wages. After factoring in inflation, paychecks in Japan have been falling for three months in a row through June.

Kishida ordered Monday another set of measures to contain inflation by early September, with a boost in funding for regional governments and a continued cap on imported wheat prices. He emphasized that wage gains need to be sustained, while saying that the additional support measures will concentrate on food, regional grants and energy.

For now, the measures will be supported by existing reserve funds, though Kishida said he’ll remain flexible in his approach.

“Inflation can cool consumption, although oil prices may stabilize with the global economy slowing down,” said Norinchukin’s Minami. “As downside risks mount in the world economy, there’s a risk that Japan’s economy could contract at some stage toward the end of the year.”

Bank of Japan Governor Haruhiko Kuroda has repeatedly said that the central bank must retain its easing program to support the economy until inflation becomes sustainable. He’s still seeking healthy wage gains, and price rises that go beyond a boom in commodities.

So far, economists expect growth in Japan to remain moderate for the rest of the year, slowing as the months progress. For the third quarter, analysts expect annualized gains of 3.2%.