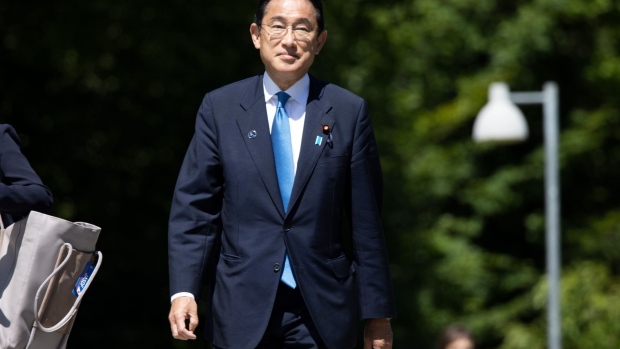 Fumio Kishida, Japan's prime minister, arrives on the opening day of the Group of Seven (G-7) leaders summit at the Schloss Elmau luxury hotel in Elmau, Germany, on Sunday, June 26, 2022. Issues on Sunday's formal agenda include the global economy, infrastructure and investment and foreign and security policy, while a number of bilateral meetings are also planned. , Bloomberg

(Bloomberg) -- Support for Japanese Prime Minister Fumio Kishida fell by 9 percentage points in the past two weeks as worries mount over rising prices ahead of a July 10 vote for the upper house of parliament, an NHK poll showed.

Support for Kishida’s government was at 50%, down from 59% two weeks ago, the poll from the national broadcaster released late Monday showed. The survey conducted for three days from Friday also said more than 40% of respondents saw economic measures as a top concern heading into the election.

But separate polling shows that Kishida’s ruling Liberal Democratic Party and its junior coalition partner Komeito will easily keep their majority in the upper house after the election over a fractured opposition that has not gained significant traction despite the premier’s falling support. Kishida’s approval rate is well above the 30% level seen as a danger zone for a Japanese premier and is one of the highest among leaders of Group of Seven nations.

Heading in the vote, the Japanese yen has fallen to lows not seen in about 24 years, adding to the costs of imported goods. The largest opposition Constitutional Democratic Party has used the term “Kishida inflation” in a bid to capitalize on recent price gains that have eroded the premier’s relatively strong support.

While the upper chamber holds less power, Kishida needs to score a convincing victory that would allow him to put off another election test for as long as three years and avoid the “revolving door” of short-serving premiers many of his predecessors have passed through.

With the election in mind, Kishida has already unveiled a raft of inflation relief measures to keep a lid on price gains. The government estimates the steps, including subsidies on gasoline, will shave 0.5 percentage point off overall consumer prices from May through September.

The LDP remains the party of choice for voters who have kept it in power almost continuously since its formation in 1955 and see it as offering a steady hand in guiding the world’s third-largest economy.

Kishida, who took office in October, has won support for taking a tough stance against Russia over its invasion of Ukraine and a maintaining a cautious Covid-19 policy that has kept Japan’s coronavirus death rate among the lowest for developed countries.