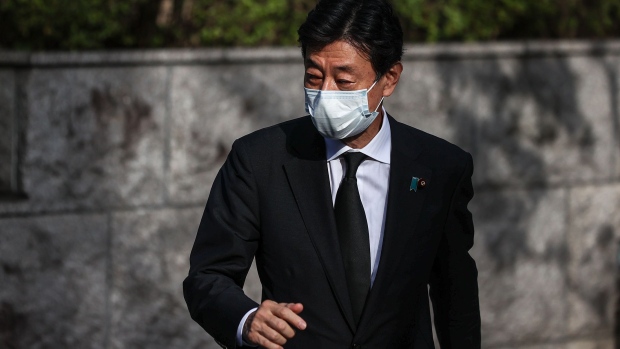 TOKYO, JAPAN - JULY 13: People walk past lit paper lanterns during the Mitama Matsuri summer festival at the Yasukuni Shrine on July 13, 2022 in Tokyo, Japan. About 30,000 lanterns are displayed during the four-day traditional festival taking place during Tokyo's Bon period in July. The controversial Shinto shrine is dedicated to the souls of about 2.5 million Japanese men, women and children who died for their country. (Photo by Tomohiro Ohsumi/Getty Images) , Photographer: Tomohiro Ohsumi/Getty Images AsiaPac

(Bloomberg) -- Japanese Minister of Economy, Trade and Industry Yasutoshi Nishimura visited a controversial war shrine on Aug. 13, Kyodo News reported, in a move that could potentially sour relations with China and South Korea.

The visit to Yasukuni was the first by a Japanese cabinet member since Prime Minister Fumio Kishida’s cabinet was inaugurated in October. Kishida made an offering to the shrine that month, angering both China and South Korea.

“Remembering the late former Prime Minister Shinzo Abe, I’m determined to do everything I can for the peace and development of Japan,” Nishimura told a group of reporters, according to the report. Nishimura is a member of the Abe faction within the ruling Liberal Democratic Party.

The Tokyo shrine honors millions of Japanese war dead, including 14 men convicted as Class A war criminals after World War II, and is generally viewed by Japan’s neighbors as a symbol of the country’s past militarism. Japan occupied South Korea for 35 years before its defeat in 1945, and its invasion of China in the run-up to the global conflict led to the deaths of millions of Chinese soldiers and civilians.

Tributes to the shrine by Japanese leaders have scarred the country’s relations with China and South Korea for years.

South Korea’s foreign ministry expressed “deep disappointment and regrets” over the visit to the shrine, which it said “glorifies Japan’s history of aggression and enshrines war criminals,” a spokeswoman said by phone.

(Updates with Korean foreign ministry’s comment in the last paragraph. A previous version of the story was corrected to say Kishida made an offering to the shrine, not visited, in second paragraph.)