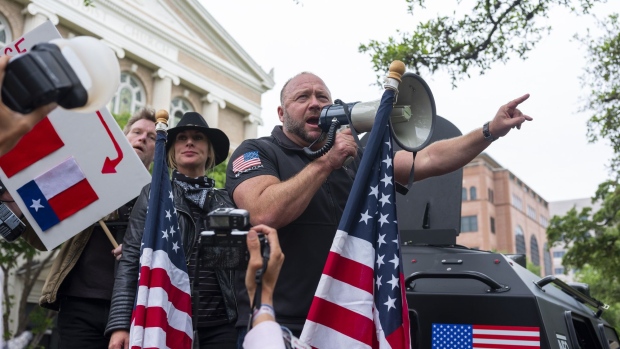 Alex Jones, radio host and creator of the website InfoWars, center, speaks into a megaphone as demonstrators gather during a 'You Can't Close America' rally outside the Texas State Capitol in Austin, Texas, U.S., on Saturday, April 18, 2020. Protesters gathered at the State Capitol Saturday to call for the reopening of the state amid the coronavirus pandemic. , Bloomberg

(Bloomberg Law) -- Infowars’ parent company won bankruptcy court approval for more budget flexibility that it says it needs amid a “surge” in its nutritional supplements and other product sales that could climb up to $450,000 per day.

Free Speech, which is the bankrupt production company of right wing conspiracist Alex Jones, had asked for approval, citing a “crisis” in fulfilling online sales and higher costs.

Free Speech’s bid to spend more money comes as it will likely face calls in its bankruptcy for greater scrutiny of its finances, following a $50 million judgment last week against the company and Jones.

Lopez said he would grant the relief for 12 days as more potential revenue would be good for the bankruptcy estate and creditors. But the “unique” ties among Jones, Blue Asension, and its owner, Patrick Riley, “needs closer examination,” the judge said.

Riley, who worked for Free Speech in various roles, testified Friday that he has a close relationship with Jones and has been his “fitness and wellness manager” for years.

Ha Nguyen of the US Trustee’s office also echoed doubts about the relationship between Jones and Blue Asension, saying it set off “a lot of alarm bells.”

Free Speech had previously projected its weekly revenues at roughly $595,000. But the company Thursday told the court its sales now could reach as much as $450,000 per day, much of it from dietary supplements. It attributed rising sales to new inventory, increased website traffic, and other factors.

A high-profile Texas trial ended last week with orders for the conspiracy theorist and Free Speech to pay nearly $50 million in damages to parents Neil Heslin and Scarlett Lewis for lying that the 2012 massacre in Newtown, Conn., was fabricated. Their 6-year-old, Jesse Lewis, was killed in the shooting.

Texas plaintiffs and the families suing Jones and Free Speech in Connecticut have questioned Free Speech’s relationship with Blue Asension.

Blue Asension was formed “just weeks” before the bankruptcy filing, the Connecticut families said. It is staffed by Free Speech’s former fulfillment department, they said.

Jones has said he doesn’t have a stake in Blue Ascension. But the Connecticut families questioned whether his family, insiders, or other affiliates get compensation from Blue Asension.

To contact the reporter on this story: James Nani in New York at jnani@bloombergindustry.com

To contact the editor responsible for this story: Roger Yu at ryu@bloomberglaw.com