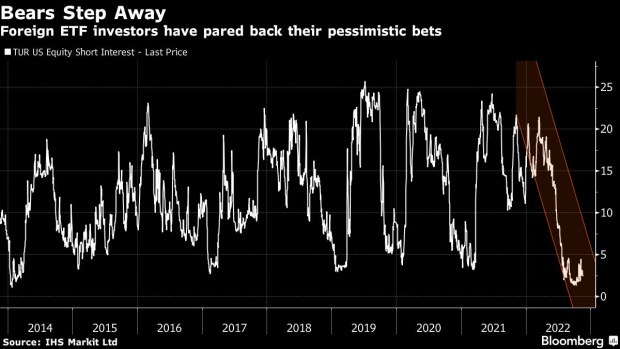 A visitor is reflected while crossing the trading floor at the Borsa Istanbul SA stock exchange in Istanbul, Turkey, on Tuesday, Aug. 14, 2018. While they are growing more critical, the underlying tone of warnings from businesses has so far been supportive of the government in principle, showing there are limits to how much Turkey’s billionaires are feeling emboldened to speak out after elections in June increased President Recep Tayyip Erdogan’s grip on power. Photographer: Ismail Ferdous/Bloomberg , Bloomberg

In a year when most of the world’s stock markets are flagging, Turkey’s is an outlier.

The country’s stock market has soared to a record high in 2022 as domestic retail investors seek a refuge from runaway inflation. The benchmark Borsa Istanbul 100 Index is up 80% in dollar terms this year. In lira terms, the index is up more than 150%, its best performance since 1999.

“Stocks will most probably continue to be favored for at least the first half of next year, even as inflation starts easing,” said Evren Kirikoglu, founder of Istanbul-based Sardis Research Consultancy. “The government is likely to maintain low interest rates and keep the currency under control until the elections around June.”

Domestic investors are piling into stocks as Turkey’s central bank pursues unconventional policies of cutting interest rates to boost growth even as inflation rates were more than 80%. Monetary easing cycles that took place in 2021, which runs counter to most global central banks’ stance, have led the lira to plunge and turned stocks into one of few havens that yield returns. The currency’s recent narrow trading range has also led to diminished interest in the government’s FX-indexed lira deposit accounts, sending domestic investors to look for alternative assets.

Here are the three top reasons why retail investors have kept buying local stocks this year and why the trend may have legs:

Turks, like everyone else globally, are battling high inflation levels, but rate cuts that began in September last year worsened matters. The country’s benchmark one-week repo rate is now down 850 basis points since then at 10.5%, which has sent Turkish real rates to minus 75%, the world’s lowest.

Inflation, in October, exceeded 85%, and while the central bank is forecasting that it could fall to 65.2% by the end of the year, it’s still among the world’s highest.

No wonder then that stocks have become an investor favorite: the number of equity trading accounts opened by retail investors rose by 32% this year to 3.1 million as of Nov. 18, according to statistics from Turkey’s Central Securities Depository.

Foreigners are still negative on Turkey: after billions of dollars of outflows, they now own a record low of 29% of the stock market. But short positions on Turkey’s largest exchange-traded fund fell last month to their lowest in almost nine years, showing that as local investors drive the market up, overseas investors aren’t betting against the market.

The ratio of shares of the iShares MSCI Turkey ETF sold short fell to 1.4% in October, down from about 20% in March and its lowest since Jan. 2014.

And finally, even though Turkey’s main opposition leader warned this weekend that “inflated values” on the country’s stock exchange pose a risk for retail investors, the country’s shares are still trading at a 50% discount to their emerging-market peers. Inflation’s impact on corporate earnings is the biggest reason for that gap.

Even though Turkish stocks’ gains this year look magnified, they’re still “below the surge in company profits,” said Pinar Uguroglu Delice, executive vice-president at BNP TEB Investment in Istanbul, referring to the 234% rise in company profits during the first nine months of this year.

The BIST 100 Index is trading at a 5.3 times forward price-to-earnings multiple. In contrast, the MSCI Emerging Markets Index is at 11.1 times.