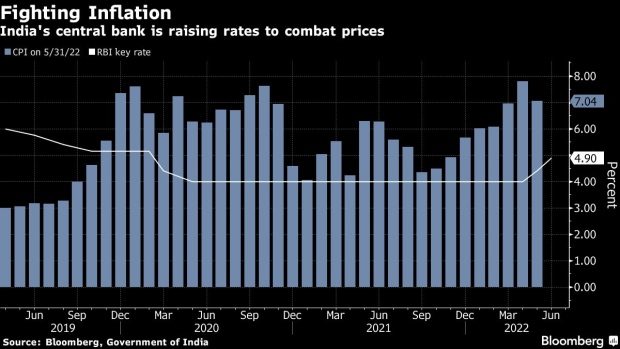 The Reserve Bank of India (RBI) headquarters in Mumbai, India, on Saturday, Feb. 5, 2022. The RBI is set to outline its policy on Feb. 9 and is expected to take further steps like raising the reverse repo rate to further pull back on pandemic-era steps. , Bloomberg

Sticking to larger hikes instead carries the risk of crimping an already weak demand without materially softening inflation, Ashima Goyal, one of the six members of the Monetary Policy Committee, warned in an email interview, adding that she isn’t speaking on behalf of the full MPC.

“Indian real interest rates are not far from neutral,” she said, referring to benchmark rate that’s risen to 4.9%, amid inflation easing to 7% in May from 7.8% in the previous month.

The Reserve Bank of India’s rate-panel bumped its key rate by 90 basis points in two moves since May, and it’s among almost 60 others that have raised borrowing costs by half a percentage point or more in one sitting to tame inflation.

Goyal is known for her reluctance to make borrowing costlier, as actions to cool demand can lead to an increase in unemployment rate in an economy still struggling to recover. While there’s no general agreement on what the neutral rate should be for a particular country, a recent paper by the Reserve Bank of India suggested that it may have fallen after the pandemic.

Economists see the central bank raising rates at least twice more before weighing a pause, given consumer price-growth in India has stayed above the RBI’s 6% upper tolerance limit since the beginning of this year.

Goyal, who is a professor at the Indira Gandhi Institute of Development, said rates will rise, but the pace will depend on inflation and growth outcomes and their impact on inflation forecasts.

Continued aggressive hikes when the economy is recovering from a pandemic shock, “will impose a large output sacrifice with little effect on inflation,” she said, adding that “prompt and decisive action keeping real rates near neutral is adequate to anchor inflation expectations.”

Besides, the government’s steps to tackle the supply-side inflation continues, she said. Her colleague in the panel Jayanth Rama Varma advocated adopting a rate guidance akin to the Federal Reserve’s dot plot, alongside the inflation forecast.

Here are some more excerpts from the interview with Goyal: