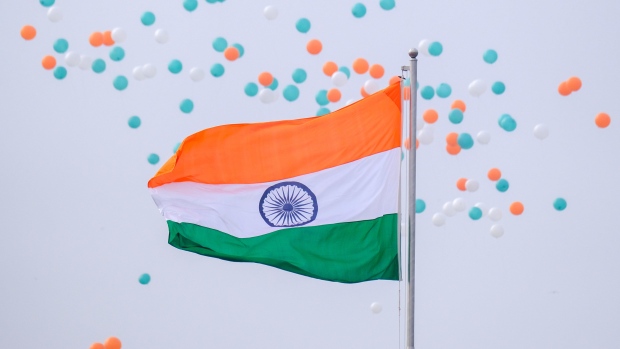 Balloons float past an Indian national flag during the Republic Day parade in New Delhi, India, on Wednesday, Jan. 26, 2022. India has bounced back strongly from the pandemic and stands poised to claim the mantle of fastest-growing economy in 2021 and probably 2022 as well. Photographer: T. Narayan/Bloomberg , Bloomberg

(Bloomberg) -- India announced tax cuts on fuels and boosted its subsidy for crop nutrients to tackle mounting inflationary pressures that have been hitting households, farmers and manufacturers in Asia’s third-biggest economy.

The federal government slashed levies on pump prices of gasoline and diesel, waived import tax on coking coal and increased subsidies on fertilizers as well as cooking gas for the poor, according to a tweet from Finance Minister Nirmala Sitharaman on Saturday. The excise duty on diesel has been reduced by 6 rupees (8 cents) a liter and on gasoline by 8 rupees.

Wholesale inflation in the world’s second-most populous nation soared in April to the highest in more than three decades as Russia’s war in Ukraine and supply-chain disruptions pushed up costs. Households are facing rising prices of fuels, cooking oil, and other essential items, while farmers and producers are severely hit by rising input costs.

“We are committed to ensure that prices of essential items are kept under control,” Sitharaman said, adding that the federal government will lose about one trillion rupees in revenues per year following its move on gasoline and diesel.

Taxes were also lowered in November last year, but benchmark Brent prices have surged since then as the war threatened the biggest market disruption in decades. Indian Oil Corp., the nation’s biggest fuel retailer, reduced pump price of diesel by 8.69 rupees a liter from Sunday and gasoline by 7.05 rupees.

The government will also provide a subsidy of 200 rupees on every liquefied petroleum gas cylinder given to poor households. An LPG cylinder currently costs 1,003 rupees in New Delhi, according to Indian Oil Corp. The payout will cost the federal budget about 61 billion rupees per year.

India will also give an additional subsidy of 1.10 trillion rupees on the purchase of crop nutrients to cushion farmers against price hikes due to a surge in international rates. The assistance will be on the top of the 1.05 trillion rupees budgeted for the financial year that started on April 1. The world’s second-biggest producer of rice, wheat and sugar, partly relies on overseas fertilizers, which have surged after the war disrupted supplies.

“While the fiscal measures could help cool price increases, and modestly reduce pressure on the RBI to take front loaded rate hikes, they are unlikely to be sufficient to divert the central bank from its path of monetary tightening,” according to Rahul Bajoria, chief economist with Barclays PLC in Mumbai.

The government also imposed an export duty of 15% on some steel products and said it’s taking steps to reduce costs of cement, a key building material, and improve its availability in the country.

(Updates to add details and comments throughout)