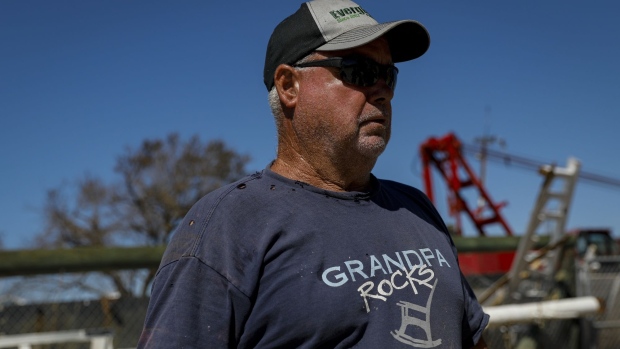 (Bloomberg) -- Shrimp boats have fed Chazz Alario’s family for four generations, first in the bayous of Louisiana, where he grew up, and now in Fort Myers, Florida.

But as his Double E shrimp boat rolled over in Hurricane Ian’s 150 mile-per-hour winds, Alario, the captain, had his wife and five kids abandon ship. He passed his three-year-old triplets over the starboard side to his wife, Susana, who waited in the driving rain on the dock as Ian’s winds howled. While they were eventually able to get to safety, they lost everything.

For years, the US shrimp industry has been battered by competition from cheap imports, and, more recently, soaring diesel fuel costs. Now, shrimpers are asking if Hurricane Ian could be the last nail in the coffin for the industry, at least in Fort Myers, which took the full force of Ian’s wrath.

“With the economy like it is, the high fuel prices, the low shrimp prices, and now we have this,” said Alario, pausing from repairs to get the Double E, now half on the dock, half in the water, back to work. “It’s just devastation after devastation.”

Alario and the other captains decided the best place to ride out the storm was on their boats. So they lashed them together and waited. As Ian hit, dozens of hands cowered inside the boats, which broke free in roiling, seven-foot seas. When the eight-foot storm surge receded, most boats had been tossed onto the dock like toys, some smashing into buildings.

Damage estimates for Ian, one of the worst storms to hit the US ever, range from $65 billion to $100 billion. The shrimpers’ plight gives a glimpse into its devastating impact on those in its path and their way of life.

At least 80 men and women were instantly jobless, and boat owners were stuck with thousands of tons of freshly caught shrimp rotting in their holds. Most of the workers have nowhere to go, so they’ve been sleeping in the dank holds of the wrecked ships.

US shrimp imports more than doubled in the last decade, to $7.4 billion, or 1.8 billion pounds in 2021, fueled by surging production from low-priced competitors in India, Vietnam, China and other countries, according to the Southern Shrimp Alliance, an eight-state industry group. In 2005, the US industry won duties on shrimp imports from six countries, Brazil, China, Ecuador, India, Thailand and Vietnam, for selling below cost.

That’s not enough, the group says. Fort Myers shrimpers get as little as 50 cents a pound for the shrimp they catch in grueling, 60-day stints off Key West.

Blain Green, 65, blamed cheap imports for his woes as he looked over Aces & Eights, the wood-hulled shrimp boat he recently bought for $150,000. It lay on its side next to a giant barge, two big gashes in the hull.

“Our margins were so thin that we really can’t take something like this,” Green said  “I have a loan payment due soon, and I don’t have money unless I bring in shrimp. What am I going to do?”

Green said he, like most of the boat owners, doesn’t have insurance because premiums have sored so much. It would cost $30,000 a year to insure his used, barnacle-covered boat if he could get coverage, which is doubtful.

“You can’t insure your boat if you want to make any profit,” he said.

This year, diesel prices rose so much that the boats couldn’t afford to go to Texas in April, when shrimp are more plentiful than on the Florida side of the Gulf of Mexico. So they stayed in Fort Myers, which put them directly in Ian’s path on September 28.

After Ian threw the Double E onto the dock, Alario and Susana took their five children, including the triplets, six-year-old daughter and 10-year-old son, to their house, 100 feet from the dock. Ian had pushed five feet of mud and sea water into the house, and it was draining slowly.

They climbed atop a soggy mattress and waited, before taking refuge in a dock warehouse with no power or water.

“I was terrified, terrified,” Susana Alario said, crying.  “Especially for my babies.”

Since then, Alario has focused on how to get his boat seaworthy again. Money won’t come until he fills the ship’s 80,000-pound holds with shrimp.

“I just need to get back in the water,” he said.