In the early, heady days of cannabis legalization, owning a licensed pot store was seen as an easy way to make money. Today, it’s seen by many as a liability.

That sentiment was thrust into focus this week after Canopy Growth Corp., one of the biggest and most capitalized cannabis producers in Canada, announced it would divest its 28 Tokyo Smoke and Tweed retail shops to OEG Retail Cannabis, a firm controlled by Edmonton’s Katz Group, and Alberta’s 420 Investments Ltd. for an undisclosed sum.

While the divestiture represented another attempt by Canopy to turn itself around and seek profitability following a series of money-losing investments, it also offered yet another example of how fraught Canada’s cannabis retail sector has become since the federal government legalized recreational sales of marijuana in Oct. 2018.

“The majority of these retail businesses were built off of a model that wasn't going to be sustainable when we started to see pricing compression in addition to not being able to control the cost of goods,” said Krista Raymer, founder of retail consultancy Vetrina Group, in an interview. “The [retail] business structure was largely unknown and didn't plan for the flexibility when we would see more competition.”

Canopy bought Hiku Brands Company Ltd., Tokyo Smoke’s parent, for about $270 million in 2018 in an all-stock deal, but the acquisition’s value closed around $600 million thanks to a rise in Canopy’s stock price. Canaccord Genuity Analyst Matt Bottomley stated in an note to clients Thursday that he estimates Canopy received around $20 million from the divestiture, not including intellectual property.

Canopy’s decision to divest its retail operations was largely seen as a positive step by analysts who cover the company. Owen Bennett at Jefferies LLC estimated that Canopy’s retail arm only generated gross margins of 15 per cent, far lower than many of its retailer peers. Piper Sandler’s Michael Lavery said the Tokyo Smoke outlets that Canopy owned accounted for 40 per cent of the company’s selling and marketing overhead.

“In the case of Tokyo Smoke, scaling a retail environment and building a franchise structure is very, very difficult,” Raymer said.

Retail woes in Canada’s pot industry aren’t isolated to one company. Following a rapid expansion of store openings across much of the country, there are about 3,310 pot shops operating today that had to navigate a steady drip of consolidation and closures.

In addition to facing pressure from nearby competitors, which hurts retailers’ gross margins, pot-shop owners also face onerous restrictions on marketing and the still-looming threat of illicit operators that aren’t beholden to the rules and taxes that the legal industry must abide by.

Retailers in Ontario and British Columbia also faced challenges obtaining inventory in August following a cybersecurity attack on the Ontario Cannabis Store (OCS) and a strike by B.C.’s cannabis wholesaler workers. According to an analysis by Stifel, the average private-sector cannabis retailer in Canada made roughly $1.2 million in annual sales as of Feb. 2022, down from a peak of about $9 million in mid-2020.

Even popular store brands haven’t been immune to the industry’s challenges. Superette, the pot shop franchise feted for its unique take on selling cannabis with style nods to Quebec’s dépanneurs, had to close several Toronto locations and sought creditor protection earlier this year. In August, the retailer was purchased by SNDL Inc., a Calgary-based producer that has been rolling up retailers under the Value Buds and Spiritleaf banners. Earlier this year, SNDL Chief Executive Officer Zach George warned investors in a shareholder letter that he expects 1,000 stores in Canada to eventually shut down due to market pressures.

That said, despite the woes retailers may be facing these days, some observers see reason for optimism.

Since consolidation is expected to remain a theme, ATB Capital Markets Analyst Frederico Gomes said in a report Thursday that investors may want to take a closer look at some of the larger publicly-traded cannabis retailers such as High Tide Inc. and Fire & Flower Holdings Corp. that have better access to capital and whose valuations are “suppressed” due to various industry-level headwinds. Meanwhile, the OCS recently announced plans to review its wholesale markups, which could improve retailer margins.

A review of the federal Cannabis Act could also loosen some marketing regulations that retailers have long sought, Raymer said, adding that the product mix on offer today is much more well-thought-out than it was at the beginning of legalization.

“There are more products in the market that are better able to connect with customers because we have way more data about consumer insights, pricing, and seasonal impact,” she added.

And the industry itself continues to grow, despite the various challenges faced by producers and retailers. Recreational cannabis sales hit $394.8 million in July, an increase of 17 per cent from a year earlier, according to Statistics Canada. 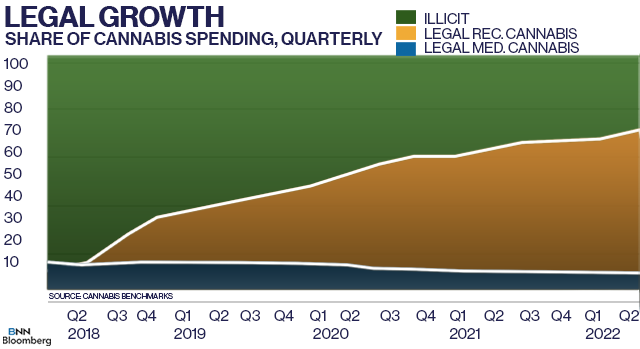 Het Shah, an analyst at Cannabis Benchmarks, said in an interview that sales continue to rise even though the pace of growth has slowed as nationwide store openings – which directly correlates to higher retail activity – decelerate. He estimates the Canadian cannabis market — which includes recreational, medical, and illicit sales — is worth roughly $8.3 billion to date.

“The silver lining is that the recreational supply is taking up a bigger chunk of overall sales,” Shah said. “It’s pushing out medical cannabis and it’s also beginning to push out the illicit supply. There’s a good chance that illicit market may not come back once the consumer is trained to buy on the legal market.”