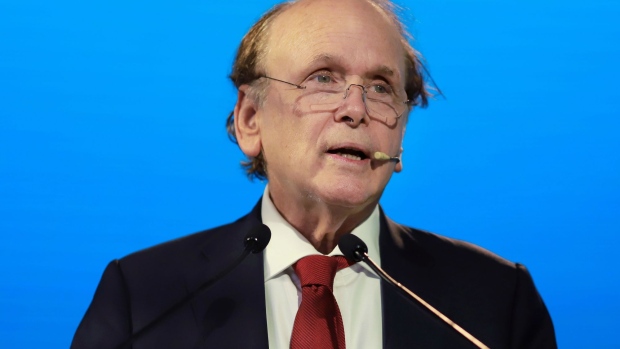 Daniel Yergin was at the St. Petersburg International Economic Forum in 2013 when he got a daunting request: Could he pose the first question from the audience to Vladimir Putin?

“I started to ask a question, I mentioned the word ‘shale,’” he recalls, referring to a once-unconventional source of oil and natural gas that by then was flowing freely in the U.S. due to advances in production techniques. “And he started shouting at me, saying shale’s barbaric.”

Yergin, the vice chairman of S&P Global, discussed the incident on the latest episode of the “What Goes Up” podcast, along with other insights from his book “The New Map: Energy, Climate, and the Clash of Nations.” US shale oil and gas have had a much bigger impact on geopolitics than people recognize, Yergin says. It has posed a threat to Putin in multiple ways, especially as US natural gas would compete with Russia’s in Europe.

Below are lightly edited and condensed highlights of the conversation. Click here to listen to the whole podcast, and subscribe on Apple Podcasts or wherever you listen.

Q: How did the US become a big oil and gas producer?

A: It was a revolution. We had eight presidents in a row, starting with Richard Nixon right up through Barack Obama, saying ‘We want to become energy independent.’ And it seemed a joke, it was never going to happen. But there was this technology called shale, which really involves hydraulic fracturing, as it’s called, combined with horizontal drilling. And there was one really obsessed individual -- it’s so interesting, the role of obsessed individuals in economic change -- named George P. Mitchell, who was convinced if you just worked somehow, even though the textbooks said it was impossible, you could make it work. And for 20 years, 25 years people scoffed, but then it did work. And even his own company, people were telling him not to spend money on it. But if he hadn’t spent that money, I’m not sure that we would’ve been where we were.

And then in the early 2000s, you started to see wildcatters -- independents, as they’re called -- small companies starting to adapt that technology. And then people said, ‘Oh, US natural gas supply, instead of going down is going up. And then they said, well, if it works for gas, maybe it works for oil too -- in about 2008, 2009. So this all really happened in that period from about 2008, that’s when it all really began, the shale revolution. And it just took the US from an entirely different position. And if you had told people in 2002 that the US was going to be the world’s largest oil producer, larger than Russia, larger than Saudi Arabia, the world’s largest producer of natural gas, and this year, the world’s largest exporter of LNG, they would’ve said you’re living in a fantasy world.

Q: It occurred to me as I was reading your book that the US going from being renowned as the biggest consumer of energy in the world to now a major producer almost escalates the geopolitical tensions. Does it make America’s influence different in this environment?

A: That’s absolutely right. I deal with a lot of things from Ukraine to climate in the book, but I start with shale because shale’s really had a much bigger impact on geopolitics that people recognize. The story I tell in the book is when I was in St. Petersburg at a conference where Putin was speaking -- 3,000 people there -- I was told to ask the first question. I started to ask a question, I mentioned the word ‘shale.’ And he started shouting at me saying shale’s barbaric. He knew that US shale was a threat to him in two ways. One, because it meant that US natural gas would compete with his natural gas in Europe, and that’s what we’re seeing today. And secondly, this would really augment America’s position in the world and give it a kind of flexibility it didn’t have when it was importing 60% of its oil.

The question started off innocuously. I was going to ask him a normal question about diversifying your economy. And I said ‘shale,’ and to be shouted at by him in front of 3,000 people, a really unpleasant experience. The other person on the stage was chancellor Merkel, who was chancellor of Germany for 16 years. And you can see the enmity between the two. But Merkel’s now being criticized for policies like shutting down nuclear that led to Germany being more dependent on Russian gas. And the judgment of history is shifting a little bit.

Q: How did everyone get Russia so wrong?

A: Now there’s a kind of revisionism that the world shouldn’t have traded with Russia, shouldn’t have tried to integrate Russia into the world economy, particularly as Putin got more and more authoritarian. But, you say, well, what was the alternative? To leave it festering there? The best thing was to get it anchored in the world. Putin, he’s been in power now almost as long as Joseph Stalin. And I think he was becoming more and more authoritarian and people who have known him over the years said that Covid changed him. He was isolated for two years. He wasn’t meeting Western business people. He wasn’t meeting Western government officials and so forth. So I don’t think there was an alternative to not trying to integrate Russia into the world, but obviously what’s happening now is the world, at least the Western world, is slamming the door on Russia.

Q: Is Europe going to be able to just soldier on without succumbing to Russia and their demands when it starts getting colder again?

That’s the question that’s really weighing now because in terms of oil, there’s enough crude oil in the world. You have to move it around, but between strategic stocks, between demand being down in China, you can manage that. When you get into products like diesel, it gets harder. And then you’re going to the hardest thing with natural gas, and that is exactly as you go into the winter. So the big question now is can they fill storage so that they can get through the winter, and, by the way, not only stay warm, but keep industry operating. And I think we can say that Putin made a series of decisions which kind of were irrational -- that his army was really good, that Ukraine wouldn’t be able to resist, that the US had just gone through getting out of Afghanistan and was deeply divided, that Europe was so dependent on his energy that they would say, ‘OK, this is terrible, but life goes on.’ And none of that happened. But I think he’s still calculating. And he said that ultimately this energy disruption -- and we are in a huge disruption of energy markets -- would be such a big threat to the European economy that the coalition that now exists would fall apart. I think that’s his wager right now. And the Achilles heel is what you pointed to: what happens as Europe goes into the fall and winter. And we’ve had at least one German, very prominent industrialist, who said, ‘This is too dangerous for the European economy. We should negotiate something with Putin.’

Listen to the rest of the episode here.