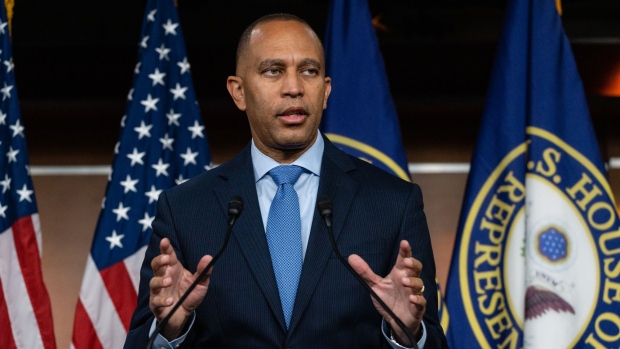 Representative Hakeem Jeffries, a Democrat from New York, speaks during a news conference following the weekly Democratic caucus luncheon in Washington, D.C., US, on Tuesday, Sept. 20, 2022. House and Senate leaders are entering a final round of negotiations on a plan to fund the government through the fall and head off a shutdown threat by the end of this month. , Bloomberg

He is the first Black lawmaker to be elected to a top congressional leadership post.

The victory for the New York Democrat is more coronation than competition. The current chair of the House Democratic Caucus, Jeffries has long been seen as the heir apparent to Speaker Nancy Pelosi (D-Calif.). Although Intelligence Committee Chair Adam Schiff (D-Calif.) initially considered a run for the top spot, he ultimately decided against it.

Rep. Derek Kilmer (D-Wash.) gave one of several speeches nominating Jeffries for leader, according to a Democratic aide.

“He’s served on the front-lines in the effort to protect our democracy, being a leader in the effort to impeach Donald Trump,” Kilmer said. “He has gone toe to toe with Republicans and with an occasionally even more formidable adversary – the US Senate.”

In addition to Jeffries, who represents part of Brooklyn, House Democrats united behind Rep. Pete Aguilar (D-Calif.) to be chair of the House Democratic caucus and Rep. Katherine Clark (D-Mass.) to be minority whip.

The top three leaders represent a generational change. Jeffries is 52, Clark is 59, and Aguilar is 43 -- relatively young compared to the current leadership. Pelosi, who was given the title of “Speaker Emerita,” is 82, House Majority Leader Steny Hoyer (D-Md.) is 83, and Majority Whip James Clyburn (D-S.C.) is 82.

Rep. David Cicilline (D-R.I.) made a last-minute bid Wednesday to be assistant leader, challenging Clyburn for the No. 4 spot. Democrats are likely to vote on that position Thursday.

“It is critical that the House Democratic Leadership team fully reflect the diversity of our caucus and the American people by including an LGBTQ+ member at the leadership table,” Cicilline, who is gay, said in a letter to colleagues.