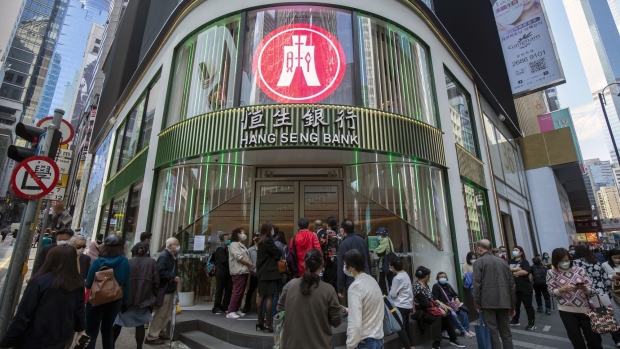 Customers queue at a Hang Seng Bank Ltd. branch, following temporary closures of other branches due to reduced service, in Hong Kong, China, on Tuesday, March 1, 2022. Hong Kong is planning to enforce a lockdown to ensure a mandatory Covid-19 testing drive planned for this month is effective, Sing Tao Daily and other domestic media reported Tuesday, as the worst virus outbreak in the city so far continues to snowball. Photographer: Paul Yeung/Bloomberg , Bloomberg

Hang Seng Bank is working with a financial adviser as it explores a so-called bancassurance partnership, which could be valued at more than $100 million, the people said, asking not to be identified because the matter is private. Under such an agreement, an insurer typically pays an upfront amount to sell its products in the bank’s branches.

Insurance firms seeking to expand in Hong Kong have expressed preliminary interest in the transaction, the people said. QBE could also propose a new partnership deal, building on its existing relationship, they said.

Considerations are ongoing and no final decisions have been made, the people said. A representative for Hang Seng Bank declined to comment.

Hang Seng Bank in 2012 sold its general insurance unit to QBE. It also signed an exclusive 10-year distribution agreement with the Australian insurer.

Hang Seng Bank, founded in 1933, provides banking, investment and wealth management services for individuals and businesses, according to its website. It counts more than 3.5 million customers. Beyond Hong Kong, the bank also has a presence in almost 20 major cities in mainland China, as well as in Macau, Singapore and Taipei. HSBC owns about 62% in Hang Seng Bank, according to data compiled by Bloomberg.