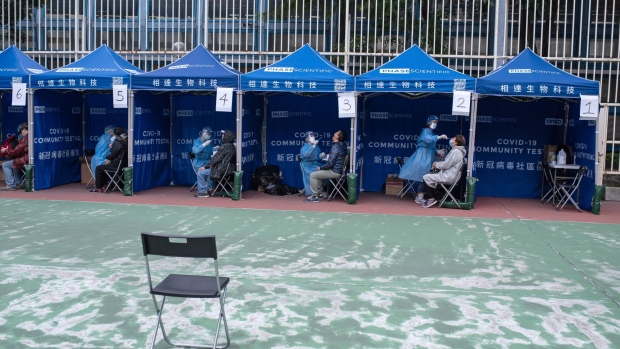 Members of the public receive Covid-19 polymerase chain reaction (PCR) tests at a community testing facility in the Tuen Mun area of Hong Kong, China, on Thursday, Jan. 13, 2022. Hong Kong is working to contain the first community outbreak of Covid-19 in more than seven months. , Bloomberg

(Bloomberg) -- Hong Kong will make Covid PCR tests available within walking distance for about five million people, and slash prices, in a move that indicates it’s entrenching testing requirements on residents permanently like in mainland China.

The city will convert some of its mobile stations into community testing centers, meaning there’ll be a network of 85 facilities spread across the financial hub, the government said in a statement Thursday. About 70% of the population will be able to reach one of the locations within a 15-minute walk from their home, it said.

The price of the tests will also drop from late this month. A PCR test that gives results within 24 hours will cost HK$150 ($19), down from HK$240 currently. Members of the public can also opt for a speedier 12-hour result collection for HK$240.

Read more: China Plans for Years of Covid Zero With Tests on Every Corner

The move to cement testing in the city underscores the balance authorities are attempting to strike between re-opening with a world that’s living with the virus, while not straying too far from the zero-tolerance approach deployed in mainland China. The world’s second-biggest economy has built a network of tens of thousands of testing booths across its most important cities to meet a goal of having residents always a 15-minute walk away from a swabbing point.

The signal that Covid testing is here to stay likely weighs on optimism that Hong Kong would do away with some of the remaining virus curbs as it seeks to revive its global standing. Officials have recently scrapped mandatory hotel quarantine and pre-departure PCR tests, but travelers still face movement curbs for three days after they arrive and a strict testing regimen.

Hong Kong’s Secretary for Health Lo Chung-mau said in a Bloomberg TV interview last week that the government will continue to test inbound travelers in order to track new variants. The city is obliged to make sure it’s not responsible for seeding a major outbreak in mainland China, he said.

Along with a strict mask mandate, the testing rules have kept Hong Kong at odds with most other places globally and prompted calls from business groups to ease further. A key test of how successful officials have been in reviving Hong Kong’s reputation looms, with the city preparing to host a banking summit and an international rugby competition in early November.

Lo is against a proposal to exempt participants of the banking summit from taking PCR tests as they are the foundation of Hong Kong’s Covid controls, Sing Tao Daily reported in a column Friday, citing people it didn’t identify. Still, participants may be spared from the three-day movement curb, if the government doesn’t scrap the measure by the time of the event, the report said.