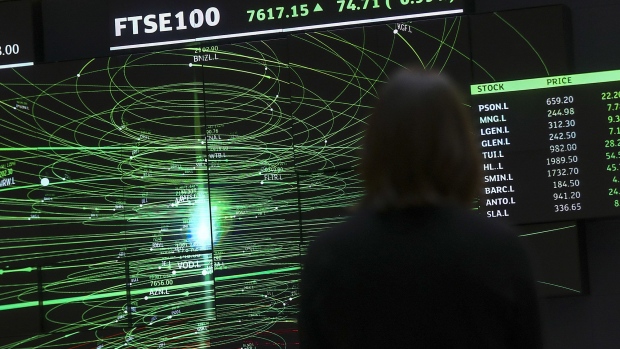 A FTSE share index board in the atrium of the London Stock Exchange. , Photographer: Simon Dawson/Bloomberg

(Bloomberg) -- Asset manager Abrdn Plc is making a comeback to the UK’s blue-chip stock index, while insurer Beazley Plc will make its FTSE 100 debut in the benchmark’s latest quarterly reshuffle.

Edinburgh-based fund manager Abrdn will re-enter the FTSE 100 next month after being demoted in August, alongside Lloyd’s of London insurer Beazley and mining machinery firm The Weir Group Plc.

Abrdn, formed via the 2017 merger of Aberdeen Asset Management Plc and Standard Life Plc, manages more than £386 billion ($464 billion) in assets, according to its website. Its shares have jumped almost 50% since an October low amid a broader market rally that has also boosted rivals like Schroders Plc and Jupiter Fund Management Plc.

Still, the shares remain about 19% lower year-to-date. Concerns about recession and the broader market malaise have hit investment managers, while Abrdn has also suffered amid a lack of progress on a turnaround plan aimed at stemming fund outflows and cutting costs.

“Questions over the long-term merits” of the 2017 deal remain, even five years later, “but for the moment, bouncy markets are giving the shares a lift,” Russ Mould, investment director at AJ Bell Plc, said ahead of the reshuffle.

Changes to the index will be effective on December 19, FTSE Russell said.

--With assistance from Thyagaraju Adinarayan.