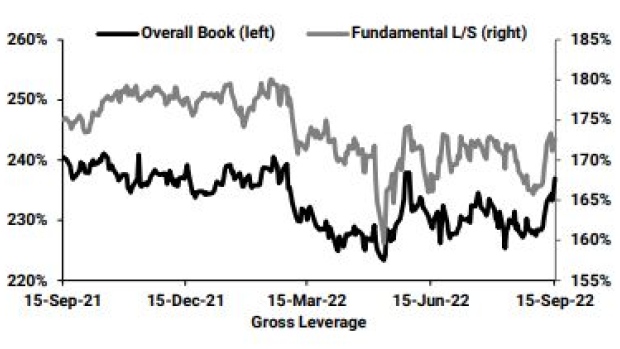 (Bloomberg) -- Professional speculators are refusing to surrender to a punishing stock market prone to choppy trends and endless volatility -- boosting bullish and bearish positions at the fastest rate in five years amid the worst equity selloff since June.

As the S&P 500 plunged almost 5% last week after a surprisingly hot inflation reading, hedge funds snapped up single stocks while betting against the broad market with products like exchange-traded funds, data from Goldman Sachs Group Inc.’s prime brokerage show. Taking their long and short exposures together, the total gross trading flow rose for a fifth straight week, sporting the largest notional increase since 2017.

The willingness to engage with a hostile market is on display at other prime brokers. Hedge funds tracked by Morgan Stanley raised bearish bets but refrained from cutting their long positions. At JPMorgan Chase & Co., fund clients were net buyers.

Any appetite to ramp up gross exposures is notable in this bear market and represents a departure from June, when the industry was forced to slash positioning across the board to cope with a violent selloff. While evidence on outright buying is mixed among prime brokers, JPMorgan data show hedge-fund sentiment is turning more constructive, thanks to sturdier fund performance of late.

While a lack of panic selling is often cited as reason for caution, it suggests stocks may have some capacity to weather the latest surge in bond yields.

“If performance were to deteriorate then perhaps the risk of further selling could increase, but for now it seems some hedge funds might be able to play a bit more offense than they were able to earlier this year,” JPMorgan’s team including John Schlegel wrote in a note.

Stocks rose Monday for the first time in three sessions, even as US yields climbed cross curves, with 10-year rates hitting the highest since 2011 in anticipation of another jumbo rate hike from the Federal Reserve Wednesday. While Treasury yields have taken out their June peak, the S&P 500 has yet to revisit its 2022 bottom, sitting 6% above its trough reached three months ago.

Many theories have been thrown around to explain the relative sturdiness of the equity market, from the idea that faster Fed tightening could mean earlier rate cuts to the belief that the economy can weather restrictive monetary policy given the strength in the American consumer.

Another theory points to the idea that bearish sentiment among investors is already well entrenched, reducing the pool of sellers and raising the bar for a fresh market shock. In Bank of America Corp.’s latest survey of money managers, equity allocations fell to record lows and cash holdings reached all-time highs.

While the long/short ratio of hedge funds last week fell to the lowest since the pandemic crash in March 2020, the group has shown interest in picking bargains, according to Goldman’s team including Vincent Lin. Funds tracked by the firm bought single stocks for a seventh straight week while exhibiting skepticism toward the overall direction of the market as they boosted short sales via macro bets like ETFs for five weeks in a row.

At Morgan Stanley, hedge fund clients had been buying stocks for previous few weeks until last Tuesday’s shock of a hotter-than-expected reading on the consumer price index. To the firm’s trading desk, the event risk around the Fed’s upcoming policy decision may have already played out.

“While valuations likely have room to come down, there seems to be little reason for the Fed to add to the volatility of its forward guidance and ‘shock and awe’ is likely not necessary at this juncture to get the market to behave,” Morgan Stanley’s sales team wrote in a note. “Market reactions to the CPI print show the Fed remains credible and potent.”