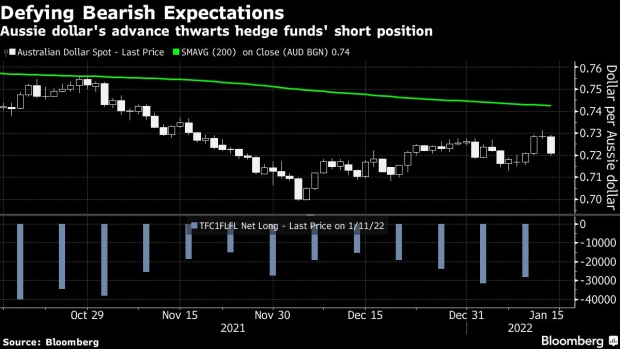 Visitors walk outside Sydney Opera House during New Year's Eve celebrations in Sydney, Australia, on Friday, Dec. 31, 2021. Australia's most populous state reported a 73% surge in new Covid-19 cases on Friday, an unwelcome spike that is casting a cloud on New Year festivities as authorities urge residents to still party on. , Bloomberg

(Bloomberg) -- The Australian dollar’s rally is testing bearish hedge fund bets on the currency, bringing employment data this week into the spotlight for further cues.

Hedge funds will be hoping Australia’s unemployment rate declines for a second straight month in December, allowing the nation’s central bank to maintain a dovish stance at its February meeting. That would take the wind out of the Aussie after it rallied last week to the highest since November.

“The Australian dollar has been supported by the weaker greenback, strong Australian economic data and higher commodity prices,” says Kim Mundy, currency strategist and international economist at Commonwealth Bank of Australia in Sydney. “The Aussie has past its weak point in this cycle,” she said, adding that she sees it rising to 80 U.S. cents by the end of the year.

The Aussie dollar has managed to offset headwinds from investors pricing in about 94 basis points of Federal Reserve rate hikes this year. That’s because traders have also factored in the Reserve Bank of Australia raising rates by about 87 basis points in 2022 despite its reluctance to signal a near-term increase.

Hedge funds however, have turned increasingly bearish on the Aussie dollar since the Fed’s hawkish policy statement in December. They increased their net short position in the currency for three weeks through January 4, taking it to 31,652 contracts, the largest in two months, before paring it slightly to 28,320 contracts in five days ended January 11, according to data from the Commodity Futures Trading Commission.

Cooling job ads in December and expectations of slower growth this quarter amid the omicron outbreak support the hedge funds’ bearish position.

Worries that China, which is Australia’s major trading partner, will also experience slower growth this quarter may help the RBA maintain its easy stance. Leveraged funds can also take solace that markets may be underpricing the amount of Fed rate hikes this year. Bill Dudley, former president of the Federal Reserve Bank of New York says the U.S. central bank may need to be even more hawkish.

In line with this the Bloomberg Economics rule, a modified version of the Taylor rule which captures key characteristics of the FOMC’s new policy approach, flags the risk of as many as six rate hikes this year.

Here are the key Asian economic data due this week: