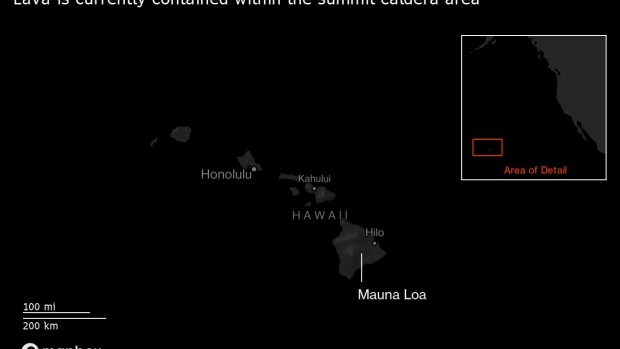 The volcano began erupting around 11:30 p.m. local time Sunday, blanketing the sky with ash. Officials have not issued evacuation orders and air traffic remains unaffected. So far, the lava is contained near the summit, though officials warned that may change.

Mauna Loa, rising 2.5 miles (4 kilometers) above sea-level, is the largest of five volcanoes that make up Hawaii’s Big Island. It has erupted 33 times since 1843, most recently in 1984. The nearby Kilauea volcano spewed ash 30,000 feet into the air in a 2018 eruption, limiting air traffic and prompting evacuations.

“Based on past events, the early stages of a Mauna Loa eruption can be very dynamic and the location and advance of lava flows can change rapidly,” officials said in a statement. While lava is being contained near the summit, “if the eruptive vents migrate outside its walls, lava flows may move rapidly downslope.”

Meanwhile in El Salvador, officials are warning local residents to take precautions after the Chaparrastique volcano erupted over the weekend, with explosions of gas and ash.

(Updates with El Salvador volcano eruption in fifth paragraph. An earlier version of this story corrected the description of Mauna Loa in first paragraph.)