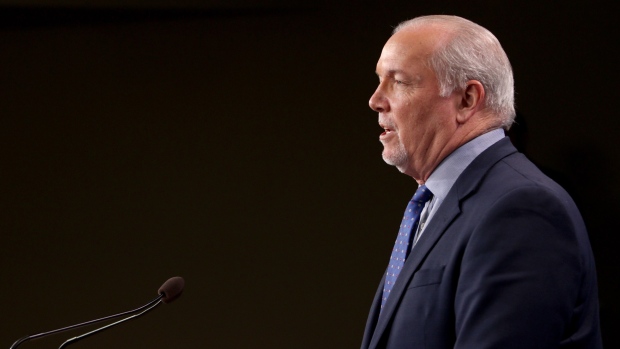 Premier John Horgan holds his first press conference of the year as he comments on various questions from the media in the Press Gallery at B.C. Legislature in Victoria, B.C., on Monday, January 13, 2020. B.C.'s New Democrat government will be pointing out its achievements on affordability and economic fronts while introducing a political agenda for the next year as the October 2021 election approaches, Horgan says. The Canadian Press/Chad Hipolito

VICTORIA -- British Columbia Premier John Horgan says a biopsy has shown a growth in his throat was cancerous.

In a statement, he says his prognosis is good and he expects to make a full recovery.

He begins radiation treatment in the next couple of weeks, which Horgan says will end in late December.

Horgan says he plans to participate virtually in briefings, cabinet meetings, and other important meetings like the Council of the Federation.