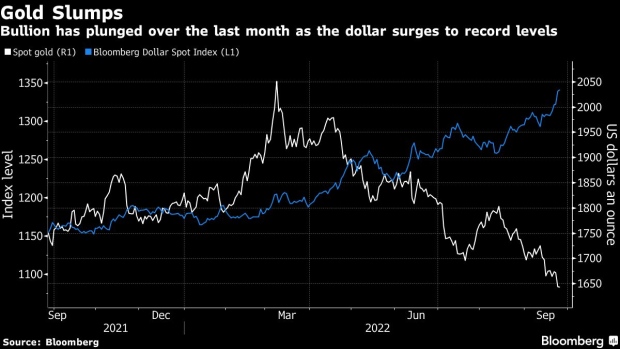 Gold granules poured into a container to be further converted into a bullion at a gold and silver refinery operated by MMTC-PAMP India Pvt. Ltd., in Nuh, India, on Wednesday, Aug. 31, 2022. Gold held near its highest level in September 2022, as the dollar continued its retreat amid growing expectations that inflation may have peaked in the US. Photographer: Anindito Mukherjee/Bloomberg , Bloomberg

(Bloomberg) -- Industrial metals fell along with gold after the dollar soared to a record amid persistent concerns that global central banks’ monetary tightening will lead to a recession.

The pound extended its slide after the Bank of England said it may not act before November to stem a rout that took the sterling to a record low. That helped the greenback extend its strength against every single major currency, and weighed on commodities that are priced in the US currency.

Investors’ appetite for the dollar as a haven asset in times of economic uncertainty means metals will likely remain under pressure going forward. Aggressive monetary tightening to rein in rampant inflation risks a recession, clouding demand prospects for copper and other industrial metals.

“In general the outlook is pretty weak for metals,” said Ryan McKay, a commodity strategist at TD Securities. “Gold, of course, should falter under a hawkish Fed and higher rates for longer. Base metals seem to be losing some supply-side support and are looking quite vulnerable to deteriorating demand conditions.”

While gold is a traditional haven in times of economic distress, it has slumped over the past month in the face of the greenback’s relentless gains and hawkish moves by central banks. Bullion has entered a bear market, trading at a level 20% below its record high in 2020, alongside consistent outflows from exchange-traded funds backed by it.

UBS Global Wealth Management strategists, including Wayne Gordon, see prices dropping into the low-to-mid $1,500s until at least the first half of 2023.

Copper, often seen as a bellwether of global growth, fell as investors bet on sharp slowdowns in the US and more demand turbulence in Europe amid the energy crisis. The weak yuan also adds to a burgeoning list of demand headwinds for China -- the world’s top metals consumer -- which already is dealing with a slump in the property sector and its strict zero-Covid policy.

London Metal Exchange copper stockpiles have continued to build, rising to the highest in over a month on Monday. That typically signals weakening demand, though the inventories are climbing from a historically low level.

Money managers last week became the most bearish on gold in almost four years as central banks around the world hiked rates in an effort to contain soaring prices. Copper speculators on the LME also cut their bullish bets to the lowest in three years.