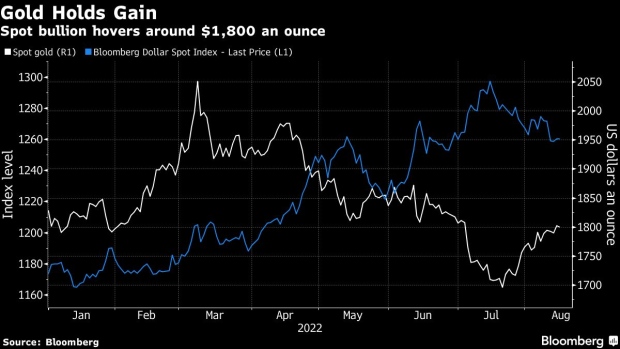 (Bloomberg) -- Gold dropped as investors assessed signs that China’s economy is struggling to recover ahead of minutes from the Federal Reserve later in the week.

China’s central bank unexpectedly cut its key interest rate as it ramped up support for an economy weighed down by virus lockdowns and a deepening property crisis. Economic data released Monday showed the country’s recovery is ebbing, potentially crimping physical demand for gold in the world’s largest consumer.

Bullion fell 1.3% on Monday, the most since mid-July, after the longest run of weekly gains in almost a year, as it came under pressure from the stronger dollar. Treasury yields fell, which would normally help bullion, but the bond yield curve remained deeply inverted, signaling worries that the Fed’s monetary tightening to fight stubbornly high inflation will spark a US recession. The latest New York State manufacturing data added to those concerns.

“The US Empire data was rotten, and it has reminded the Fed that they need to be extra careful with their monetary policy as the US economy has applied an emergency brakes,” said Naeem Aslam, Chief Market Analyst at Ava Trade. For bullion, it still needs to break the key psychological level of $1,800 an ounce before moving further up, he said.

Traders will be looking to the release of minutes from the Fed’s July meeting on Wednesday, which may offer clues as to what conditions would prompt the US central bank to go big with tightening yet again in September. Bets in financial markets on the size of the next increase have swung between 50 and 75 basis points.

Inflation in the US is likely to remain high into the fourth quarter, which could drive some near-term headwinds for gold, although the worst is likely over, said Yeap Jun Rong, a market strategist at IG Asia Pte. “Today’s move lower could be due to some profit-taking as markets may have already priced the peaking-inflation narrative to a large extent.”

Investors are also monitoring a two-day visit of a US congressional delegation to Taiwan, which risks keeping tensions with China high after House Speaker Nancy Pelosi’s trip earlier this month.