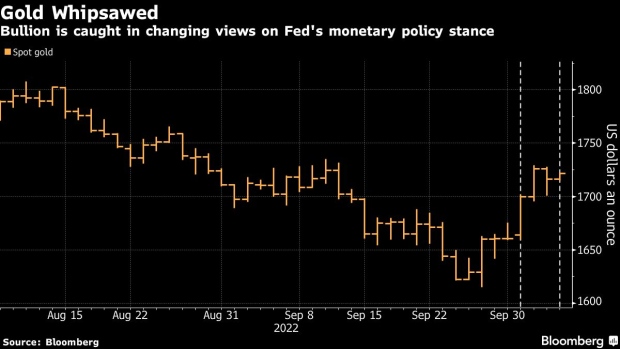 (Bloomberg) -- Gold slipped as fresh data continued to paint a mixed picture of the US economy, clouding the outlook for the Federal Reserve’s interest-rate path.

Initial unemployment claims in the US increased by 29,000 to 219,000 in the week ended Oct. 1, Labor Department data showed Thursday. The print was more than forecast, although it remained at a historically low level. The dollar extended its advance after the data, weighing on bullion since it is priced in the greenback.

The precious metal has been whipsawed by changing views on the US central bank’s stance. It gained almost 4% in the first two trading sessions of the week amid disappointing US data, but slipped 0.6% Wednesday after fresh figures showed the American economy remains resilient. The next economic data that could affect gold prices will be Friday’s nonfarm payrolls report.

“Gold appears to be anchored as traders await nonfarm payrolls,” said Ed Moya, senior market analyst at Oanda, adding that “mixed” employment data so far “should mean tomorrow will be a volatile day for gold.”

Fed officials have continued to reiterate their hawkish stance on interest rates while inflation remains high, though that failed to quell expectations of cuts in 2023. The inflation outlook became even murkier after the OPEC+ alliance agreed to the biggest oil production cut since 2020. That could fan global price pressures once again, which had been easing partly because of declining crude prices.

“The Fed’s case has not changed since the cycle began in March 2022, slashing inflation is more important than growth itself,” Tom Price, an analyst at Liberum, wrote in a note. “This stance offsets any price upside from ongoing energy-related inflation shocks.”

Spot gold edged lower to close at $1,712.43 an ounce at 5 p.m. in New York. The Bloomberg Dollar Spot Index strengthened 0.7%. Silver, platinum and palladium all gained.