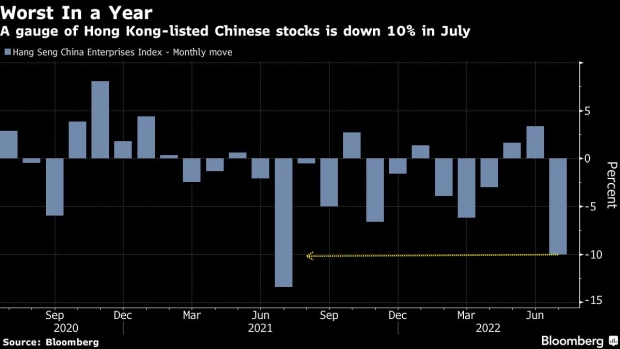 (Bloomberg) -- Chinese stocks plunged Friday to cap a brutal month which marked the return of almost all the worries that have spooked investors for much of the past one year.

From signs of renewed crackdown on the tech sector to an escalation of the crisis engulfing property developers and a rebound in Covid-19 cases, traders have had to contend with a lot of bad news in July. With little sign that authorities are planning to go big on policy support, doubts are rising once again about whether a bottom has yet to be seen for the market.

The Hang Seng China Enterprises Index of stocks slumped 2.8% on Friday, taking its July loss to over 10% -- its worst monthly performance in a year. Tech and property shares led the broad selloff after a lack of fresh stimulus at the China’s Politburo meeting left markets disappointed.

“The problems haunting Hong Kong’s stock market are unlikely to go away any time soon,” said Dickie Wong, executive director of research at Kingston Securities Ltd. “The regulatory uncertainty still lingers in the tech space,” he said, adding that even though the Chinese government is taking the property situation very seriously and has asked banks to step up support for developers, “there is no clear solution to the crisis.”

Tech shares saw the steepest rout since early May on Friday, with a Hang Seng gauge of the sector sinking 4.9%. Alibaba Group Holding Ltd. plunged as investors assessed the impact of Jack Ma reportedly ceding control of its fintech arm. Caution also prevailed ahead of its earnings next week, when it is expected to report a revenue decline.

China’s benchmark CSI 300 Index also declined, taking its decline for the month to about 7% and snapping a two-month rally that braved a global equities slump.

The nation’s antitrust watchdog fined Alibaba and Tencent Holdings Ltd. earlier this month for not properly reporting past transactions. Just days later, a report saying executives from Alibaba were summoned by authorities in connection with the theft of a vast police database triggered more declines in tech shares.

The crisis in the property industry also escalated this month as more buyers revolted against mortgage payments on unfinished homes. Country Garden Holdings Co. -- China’s largest builder, and Alibaba are among the worst performers on the HSCEI gauge this month.

Meanwhile, the economic toll from virus restrictions continues to weigh on sentiment. China’s small and medium-sized manufacturers’ willingness to hire new workers is close to a record low, adding to labor market challenges in an economy that last quarter grew at the slowest pace since it was first hit by the coronavirus outbreak two years ago.

“I think the offshore, foreign sentiment towards China is very, very bearish at the moment,” Thomas Taw, head of APAC iShares Investment Strategy at BlackRock Inc., said on Bloomberg Radio. “We were kind of looking for more policy” from the Chinese government before the National Party Congress later this year, he said.

Still, some market watchers are optimistic of a rebound after the sharp equity selloff.