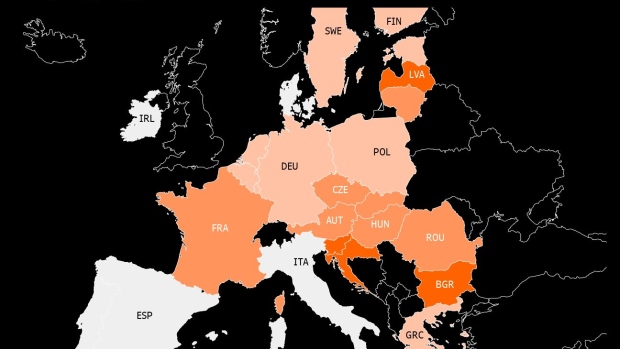 (Bloomberg) -- Germany urgently needs stricter measures to check a surge in Covid-19 infections and protect hospitals from a “particularly dangerous situation,” according to the head of the country’s DIVI intensive-care medicine lobby.

ICUs have had to find beds for about 1,400 additional coronavirus patients in the past week, DIVI President Gernot Marx said. The total number -- currently at about 4,600 -- will reach 6,000 by Christmas, exceeding the peak during the second wave of the pandemic last winter, he predicted.

“We have to protect our staff and prevent our clinics from collapsing under the pressure,” Marx said Wednesday in an interview with ZDF television. He also called for mandatory Covid vaccines for all adults, saying the step is needed “not just to break the fourth wave but to prevent a fifth and sixth wave.”

Germany is moving closer to making Covid-19 shots compulsory, with Olaf Scholz, the incoming chancellor, throwing his support behind the initiative. The Social Democrat, who is due to be sworn in to replace Angela Merkel next week, called for a parliamentary vote before the end of the year.

Despite previous assurance that vaccines would be voluntary, there has been growing consensus across a number of parties for a mandate. Compulsory shots could then begin in February or March.

Scholz, Merkel and the heads of Germany’s 16 regions will hold more talks on Thursday on a number of proposals for new restrictions, including tighter curbs on unvaccinated people, limiting fans at soccer matches and closing bars and nightclubs in hard-hit areas.