General Electric Co. will split into three separate companies in a stunning breakup of the iconic manufacturer founded by Thomas Edison whose sprawling businesses once made it the world’s most valuable company. The shares surged.

GE will spin off its health-care business in early 2023 and combine its renewable energy, fossil-fuel power and digital units into a single energy-focused entity that will be spun off a year later, the company said Tuesday. The remaining company will consist of GE Aviation, its jet-engine division.

“What we’re doing today is creating three outstanding investment-grade, global leaders in health care, aviation and energy,” Chief Executive Officer Larry Culp said in an interview. “GE has led in these markets for a long time and today we’re setting ourselves up for another century of leadership.”

GE shares rose 5.7 per cent to US$114.60 at 9:53 a.m. in New York and earlier gained as much as 7.1 per cent, the most intraday since May 27. the Boston-based company said it expects to take a one-time US$2 billion charge from separation, transition and operational costs tied to the plan, plus tax costs of less than US$500 million.

“The breakup makes strategic sense,” Deane Dray, an analyst with RBC Capital Markets, said in a note. The breakup could generate 20 per cent upside to GE’s current share price, according to his analysis. There will be “attractive value to be unlocked.”

END OF AN ERA

The sweeping plan marks the end of an era in which conglomerates defined much of 20th century corporate America and follows the break-up of several other large, diversified companies as investors favor focus over breadth. Dray, in his analyst note, cited 3M Co., Emerson Electric Co. and Roper Technologies Inc. as candidates for possible separations.

In a call with analysts, Culp called the announcement a “defining moment” for GE.

Culp’s vision is also a rebuke of the strategy championed by Culp’s larger-than-life predecessors, including Jack Welch, who famously built the company into a diversified juggernaut with businesses spanning television, finance, energy and many other unrelated markets. Welch’s successor as CEO and chairman, Jeffrey Immelt, continued to reshape the company over some 16 years starting in 2001, though with notably less success.

One sign of how much GE had fallen by the wayside: 20 years ago, it was the world’s largest company with a market capitalization of US$401 billion. Five years ago it was just hanging on in the top 10; and as of Monday there were dozens with bigger market caps in the S&P 500. 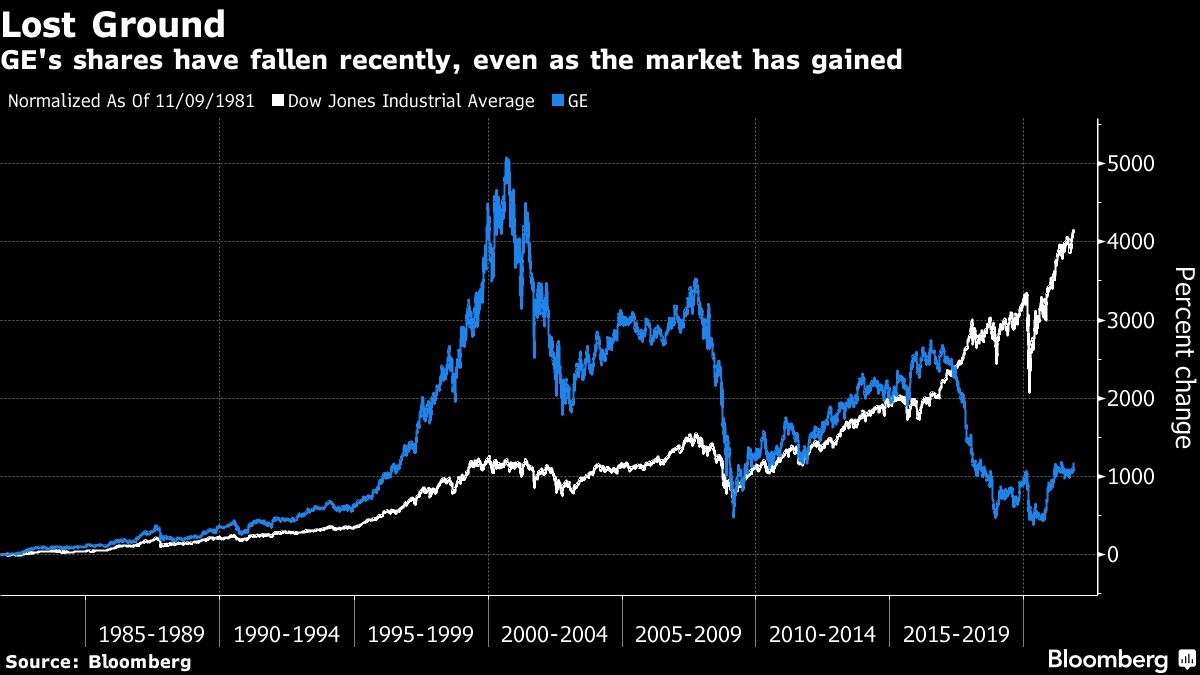 Culp, who previously reshaped Danaher Corp., was tapped as GE’s CEO in October 2018 as the company was facing multiple crises including trouble at its financial services arm and power business. He moved swiftly to stabilize and turn around the manufacturer, slashing GE’s venerable dividend to a token penny a share.

Culp since sold major businesses to cut GE’s bloated debt, pushed operational fixes to bolster cash flow and profits at its industrial divisions and mitigated the Boston-based company’s risks in a broad retrenching from its once sprawling conglomerate structure, including the sale of the bulk of the GE Capital finance arm.

Each of the three companies that result from the breakup will have its own board of directors.

The company also said the health-care business will issue debt securities, the proceeds of which will be used to pay down outstanding GE debt. Longer-term, GE expects the business to generate operating profit margins in the high-teens to 20 per cent.

“What we’re really doing is positioning these businesses to reach their full potential,” Culp said. “There is no question that this is the best way in our view to create long-term value.”

The energy unit holding GE’s renewable and fossil-power businesses should achieve mid- to high-single digit margins even with low rates of growth. GE Aviation’s margins could reach 20 per cent, according to GE’s investor presentation.

Culp’s plan was praised by Trian Fund Management, the activist fund led by Nelson Peltz that amassed a US$2.5 billion stake in GE in 2015 and demanded more dramatic actions to revamp the corporation.

Each company will be better positioned to serve its customers, benefiting from greater focus, accountability and agility, GE said.

It also expects debt reduced by the end of 2021 to exceed US$75 billion since the end of 2018, more than the US$75 billion anticipated previously. It also plans to bring the ratio of its net debt to earning before interest, taxes, depreciation and amortization to less than 2.5 in 2023.

Longtime GE analyst Nick Heymann of William Blair & Co. said the company’s breakup is as much about the conglomerate model as it is about GE itself.