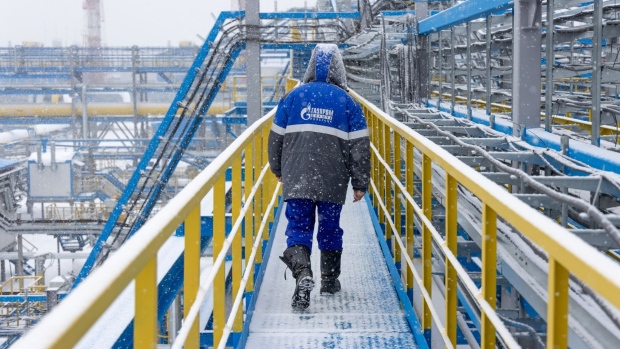 A worker walks along an access platform at the Comprehensive Gas Treatment Unit No.3 of the Gazprom PJSC Chayandinskoye oil, gas and condensate field, a resource base for the Power of Siberia gas pipeline, in the Lensk district of the Sakha Republic, Russia, on Monday, Oct. 11, 2021. Amid record daily swings of as much as 40% in European gas prices, Russian President Vladimir Putin made a calculated intervention to cool the market last week by saying Gazprom can boost supplies to help ease shortages. Photographer: Andrey Rudakov/Bloomberg , Bloomberg

Net income rose to 581.8 billion rubles (US$7.8 billion) compared with a net loss a year ago and beat median estimates, the Russian gas producer reported Monday. Revenue rose 70 per cent from a year ago to 2.37 trillion rubles, also a record-high.

The world’s largest gas producer is benefiting from a historic surge in prices amid a supply crunch in Europe, its largest export market. Russia’s gas deliveries to the continent have been capped as it has prioritized re-stocking domestic inventories. This has led to tougher competition with Asia for liquefied cargoes, with Europe’s storage facilities beginning winter at multiyear lows.

The situation in Gazprom’s key export markets has contributed to record earnings, according to Gazprom Deputy Chief Executive Officer Famil Sadygov. “Given the current dynamics, we are expecting even more impressive results in the fourth quarter,” he said in a separate statement.

“The massive rally in European gas prices should see profitability jump significantly again” in the first quarter of next year, Ron Smith, an analyst at BCS Global Markets, said in a note following the earnings report.

While gas prices in Europe more than doubled in the third quarter of this year, Gazprom’s revenues didn’t surge by nearly as much as they did in the previous three-month period due to its long-term supply contracts. Price formulas in the contracts factor in a range of spot and forward markets, including in some cases the cost of other fuels like crude.

Gazprom shares have fallen over the past month amid uncertainty on an approval timeline for its Nord Stream 2 pipeline project. The gas link, which is set to ship 55 billion cubic meters a year directly to Europe across the Baltic Sea, would reduce the company’s transit risks and allow Russia to hike volumes delivered to the European Union, if needed.

Gazprom’s record earnings signal the producer is on track for the highest dividend payouts in its history. The nine-month results imply payouts of 29.68 rubles per share, according to analysts at Moscow-based Aton.

The Russian gas giant expects its dividend for 2021 to reach at least 50 rubles per share, Sova Capital analyst Mitch Jennings said, citing remarks Gazprom management made to investors at a recent meeting. If the plan materializes, this year’s payout will be at least triple the current dividend record of 16.61 rubles per share set in 2018.