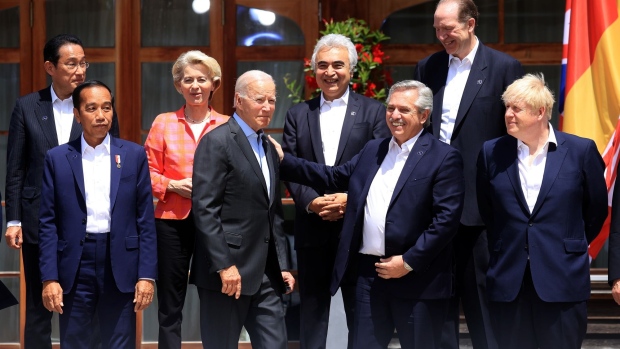 US President Joe Biden, center left, and Alberto Fernandez, Argentina's president, at the 'family' photo on day two of the Group of Seven (G-7) leaders summit at the Schloss Elmau luxury hotel in Elmau, Germany, on Monday, June 27, 2022. G-7 nations are set to announce an effort to pursue a price cap on Russian oil, US officials said, though there is not yet a hard agreement on curbing what is a key source of revenue for Vladimir Putin for his war in Ukraine. , Bloomberg

(Bloomberg) -- Group of Seven leaders are set to instruct ministers to explore implementing a price cap on Russian gas, according to people familiar with the discussions.

The mandate is expected to be announced as the three-day summit ends Tuesday. It comes as part of broader discussions on how to limit the profit Russia makes on its energy exports. The leaders are also expected to mention a mechanism to cap prices on Russian oil in the final communique.