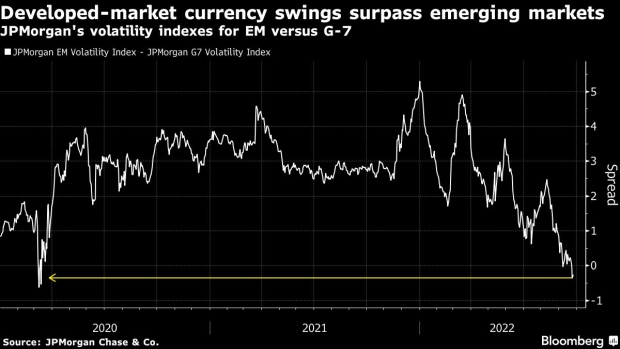 Expected volatility in Group-of-Seven nation currencies surged to surpass that of emerging-market peers for the first time since the March 2020 rout, according to JPMorgan Chase & Co. indexes. One-month implied volatility on the pound climbed above measures of anticipated price swings in most developing currencies including the Brazilian real and Polish zloty as sterling tumbled to an all-time low.

The Federal Reserve and Bank of England were among central banks raising interest rates last week, underscoring the drastic tightening cycle underway as inflation grips the global economy. Meantime, Japan intervened to prop up the yen for the first time since 1998 after the Bank of Japan stuck with its ultra-low rates.

“The unpredictability of G-10 central banks has increased the volatility of the major currencies,” said Mansoor Mohi-uddin, chief economist at Bank of Singapore, who referred to the pound as the “British peso.”

Traders are also betting on wider fluctuations in the currencies of Norway and Sweden than South Africa’s notoriously volatile rand and South Korea’s won.

Faster growth projections and signs that some developing economies are making progress in taming inflation are helping to cushion the blow from global policy tightening on emerging markets. Many have also built up substantial foreign currency reserves that they have used to defend their currencies against a rallying US dollar, damping volatility, with Indonesia’s central bank intervening on Monday.

Still, central banks in developing economies will need to match the hawkish stance of their Group-of-10 peers to prevent their currencies from sliding too quickly. Investors stung by developed-market losses are set to pare their exposure to emerging assets too, said Bank of Singapore’s Mohi-uddin.

“The longer these periods of extreme uncertainty prevail, the more likely EMs will be forced to let their currencies weaken,” said Rajeev De Mello, a global macro portfolio manager at GAMA Asset Management. He sold his emerging-market currency and equity positions last week, and sought the safety of the dollar and Swiss franc instead.