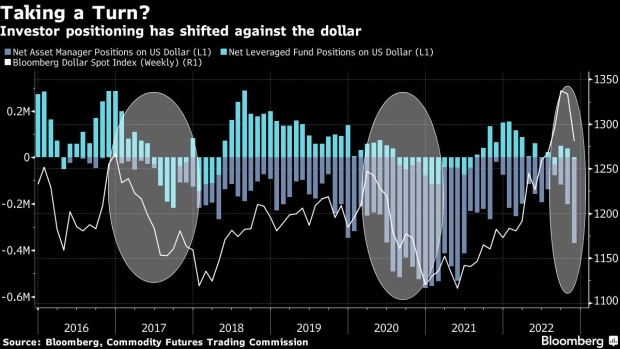 Bundles of U.S. 100 dollar banknotes arranged at the Shinhan Bank headquarters, a unit of Shinhan Financial Group Co., in Seoul, South Korea, Sept. 14, 2022. Policy makers in Asia pushed back against a surging dollar, seeking to stem losses as their currencies teetered on the brink of key levels that may trigger more selling. Photographer: SeongJoon Cho/Bloomberg , Bloomberg

(Bloomberg) -- The dollar extended declines after posting its biggest one-month drop since 2009 and money managers are amping up bets it will continue to fall.

The Bloomberg Dollar Spot Index fell 0.4% in Asia Thursday as traders dialed back wagers on how high Federal Reserve interest rates might go in the wake of comments from Chair Jerome Powell that were interpreted dovishly.

Over the past month, pension funds, insurance companies and other institutional investors have amassed their largest net short position on the greenback in nearly a year and a half, based on data from the US Commodity Futures Trading Commission.

Moves by such large and typically long-term investors to lean against the greenback have helped push down the Bloomberg Dollar Index by 4.8% in November, a scale of decline last seen more than a decade ago.

Asset managers have been consistently short on the dollar since 2017, even during periods of strength for the US currency. What’s different now is that leveraged funds -- a category that tends to include more speculative investors -- also turned net sellers, according to recent data. That’s a shift from being positive on the greenback over the previous two months.

When institutional investors and leveraged funds become net sellers simultaneously, the market can take that as a signal that the dollar is headed for sustained sell-off. This was the case in two previous bouts of weakness for the greenback in 2017 and 2020.

Overall positioning in the dollar turned net short early in November just as asset managers from Invesco to JPMorgan Asset Management started saying the dollar’s bullish run looked to be drawing to a close. Early signs that US inflation has peaked in intensity will prompt the Federal Reserve to slow the pace of rate hikes, they argue, which in turn could remove a key source of recent greenback strength.

“It’s been a rapid movement in the last two months, going from overweight to neutral, and the direction of travel has continued to go away from the dollar,” said Alessio de Longis, head of global tactical asset allocation at Invesco in New York.

Analysts at Danske Bank A/S, which remains bullish on the US currency, think it’s possible that asset managers and leveraged funds may continue to build short bets on the dollar in the near term. Even so, they caution that it may be premature to see a longer-term trend developing for the dollar to suffer further declines.

“The move so far suggests that asset managers could be getting fearful of getting caught off guard by the dollar move potentially extending,” Kristoffer Kjaer Lomholt, head of FX research at the Copenhagen-based bank, said before Powell’s most recent comments.

Investors should focus on fundamental drivers including inflation readings and the outlook for interest rates to gauge a longer-term direction for the dollar, he added.

“You could argue the case that as overall dollar positioning has become more neutral from extremely overstretched positions, there’s room for fresh longs to be added,” Kjaer Lomholt said.

Powell underscored that the central bank doesn’t want to crash the economy through rate hikes and that officials want to avoid overtightening. “The time for moderating the pace of rate increases may come as soon as the December meeting,” he said at a Brookings Institution event.

The Fed chief “dovishly shifted his risk tolerance from asymmetrically favouring over-tightening to now becoming more sensitive to the growth risks of doing so,” said Simon Harvey, a foreign-exchange analyst at Monex Europe. “This fed straight into the markets confirmation bias and thus sparked life back into the risk-on rally.”

--With assistance from Stephen Kirkland and Ruth Carson.