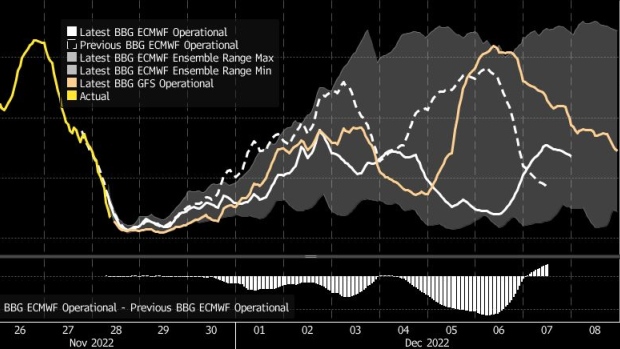 Vapor rises from a cooling tower in the Cruas Nuclear Power Plant, operated by Electricite de France SA (EDF), on the River Rhone in Cruas, France, on Saturday, Sept. 24, 2022. France President Emmanuel Macron has been making the case for energy savings and more investment in clean power and new nuclear plants to curb fossil fuel use and fight climate change. , Bloomberg

(Bloomberg) -- UK network operator National Grid Plc stood down a call on some households to cut energy use as it tries to plug the gap left by a decline in wind generation.

Power prices surged with some hourly contracts for Tuesday almost quadrupling compared to a week ago on Epex Spot SE as wind generation is set to fall away to almost nothing. The tight supply situation brought National Grid to the cusp of needing a new tool that pays some homes to reduce consumption.

Britain is the second-biggest market for offshore wind in the world and is particularly exposed to troughs in generation as it relies heavily on expensive gas for back up. Supply cuts following Russia’s war in Ukraine have pushed up prices to more than triple usual levels for this time of year. The UK gets more than a third of its electricity from gas and uses the fuel to heat 85% of homes.

Thousands of households with smart meters have signed up to participate in the demand reduction program. So far, the tool has been in test mode but it’s now live if needed. It’s too late for new participants to sign up with eligible customers having already been selected by their supplier.

Temperatures are set to be colder than previously forecast on Tuesday and Wednesday, according to Weather Company data on Bloomberg, boosting demand for heating. Power consumption is expected to peak at 41.1 gigawatts at 6 p.m. on Monday, rising to 42.4 gigawatts on Tuesday, National Grid Plc data show.

National Grid also issued a warning that its buffer of spare capacity will narrow this evening, flagging that the grid is struggling to match demand with enough supply. The warning was quickly canceled but shows the problem the UK has when the wind isn’t blowing.

The UK will need to fire up more gas stations to fill the gap left by the drop in wind. Generation is forecast to be as low as 677 megawatts around 6 p.m. on Monday, a peak time for demand. Wind levels won’t perk up until Thursday, Bloomberg’s model shows.

(Updates with call to stand down demand cuts)