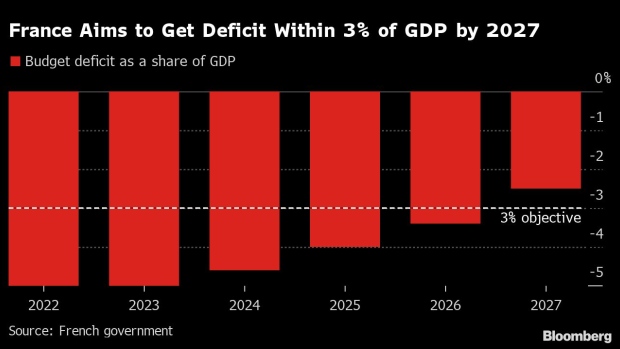 Emmanuel Macron, France's president, at a news conference on day one of the European Union (EU) leaders summit at the European Council headquarters in Brussels, Belgium, on Thursday, June 23, 2022. European Union leaders granted Ukraine candidate status that moves it closer to the war-torn nation’s long-sought goal of joining the Western bloc. , Bloomberg

(Bloomberg) -- The French government presented a budget on Monday that aims to renew Emmanuel Macron’s fiscal credibility despite extra spending to cushion energy price shocks and the challenge of emboldened opposition in parliament.

After vast outlays during the Covid pandemic, the president has built an economic plan for his second five-year term rooted in containing the deficit below 5% of output next year and below the European Union’s 3% ceiling by 2027.

Balancing tax and spend is fast becoming tough, however, as the economic outlook deteriorates and the cost of capping electricity and natural gas prices soars. After spending around 50 billion euros ($48 billion) in 2021 and 2022 to mitigate the impact of inflation for households and firms, the 2023 budget earmarks another 16 billion euros to prevent bills from rising more than 15%.

The fiscal plan will sacrifice some of Macron’s pro-business aims by delaying tax cuts to preserve government revenues and keep the deficit goal in sight. The finance ministry will also step up efforts to constrain spending in debate with the parliament.

“France is counting every euro,” Finance Minister Bruno Le Maire said at a press conference Monday. “That is the necessary state of mind for us to remain an economic power that is respected by international peers.”

In addition to financial challenges, there are heightened political risks surrounding the 2023 budget after Macron lost his absolute majority in parliament in June elections. Unless the government gets the backing of some opposition lawmakers, Prime Minister Elisabeth Borne would likely need to use an article in the constitution, called 49.3, that allows bills to pass without votes. The price would be to expose her government to the risk of being toppled in a no-confidence vote.

In an interview with French newspaper JDD on Sunday, Budget Minister Gabriel Attal said opposition parties are unlikely to back the fiscal plan as a matter of principle, leaving little doubt about the parliamentary outcome.

“The oppositions have themselves said that 49.3 is probable,” Attal said. “Whatever happen, France can’t do without a budget.”

Other key points on France’s 2023 budget:

Divisions could widen further if the government includes an amendment to raise the retirement age in the social security chapter of the budget instead of negotiating a reform with unions and opposition parties. Prime Minister Elisabeth Borne said earlier Monday that Macron will decide how to carry out the pension overhaul later this week.

There are also economic risks as the equilibrium of the budget assumes growth of 1% next year, a base case that is increasingly uncertain. Economists expect only 0.5%, which is also the Bank of France’s “reference scenario.” If the economy is weaker than the government expects, the budget would need to be revised with more rigor to achieve the deficit target.

“There is never certainty with a growth forecast, but there is an ambition,” Le Maire said. “In the current circumstances the French economy is resisting and the fundamentals remain solid.”

(Updates with comments from French finance minister, details on budget)