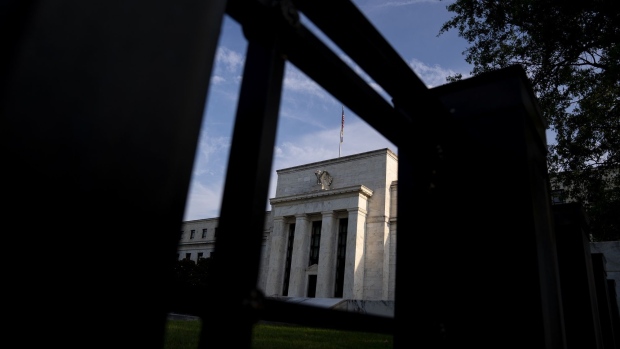 The Marriner S. Eccles Federal Reserve building in Washington, D.C., U.S., on Monday, July 26, 2021. Senators negotiating a $579 billion infrastructure package are aiming to finish negotiations early this week, under pressure from colleagues to salvage an August recess and to allow the Senate to turn to preventing a government shutdown and debt ceiling default in the fall. , Bloomberg

(Bloomberg) -- Federal Reserve policymakers stressed on Monday that they will raise borrowing costs further to curb inflation, with one key official saying that he sees interest rates heading somewhat higher than he had forecast just a couple of months ago.

“Stronger demand for labor, stronger demand in the economy than I previously thought, and then somewhat higher underlying inflation, suggest a modestly higher path for policy relative to September,” New York Fed President John Williams told reporters Monday after an event hosted by the Economic Club of New York. “Not a massive change, but somewhat higher.”

At a separate event, St. Louis Fed President James Bullard, one of the central bank’s most hawkish officials, said he thinks “markets are underpricing a little bit the risk that the FOMC will have to be more aggressive rather than less aggressive in order to contain the very substantial inflation that we have in the US.”

Fed officials have signaled they plan to raise their benchmark rate by 50 basis points at their final meeting of the year on Dec. 13-14, after four successive 75 basis-point hikes. Policymakers could also raise their forecasts -- though it’s not clear by how much -- for how high rates will eventually go when they update their economic projections during the meeting.

In an interview with Bloomberg Television, Fed Bank of Richmond President Thomas Barkin said he favored slowing the pace of rate hikes in recognition of past aggressive moves, while adding that the peak may need to be held for longer at potentially higher levels to dampen inflation.

“I’m very supportive of a path that is slower, probably longer and potentially higher than where we were before,” Barkin said. He added that he expects peak rates “certainly” to be higher than he thought a couple months ago.

The main rate is currently in a target range of 3.75% to 4%. Investors see it peaking around 5% next year, according to pricing in futures contracts.

Williams, who also serves as vice chair of the policy-setting Federal Open Market Committee, mused about a path to eventual rate cuts but said that moment is at least a year away.

“I do see a point, probably in 2024, that we’ll start bringing down nominal interest rates because inflation is coming down and we would want to have real interest rates appropriately positioned,” he said.

While the latest projections, from September, do show Fed officials expect interest-rate cuts in 2024, policymakers have largely shied away from discussing forecasts that far out, instead focusing on the need to raise rates and keep them elevated to ensure inflation falls.

Also, Cleveland Fed President Loretta Mester said in an interview with the Financial Times, published Monday, that the central bank wasn’t yet near a pause in its rate-hike campaign.

Bullard, in a webcast interview with MarketWatch and Barron’s, reiterated his view that the Fed needs to at least reach the bottom of the 5% to 7% range to meet policymakers’ goal of being restrictive enough to stamp out inflation near a four-decade high.

“We have to avoid that temptation here and really stay with restrictive level of the policy rate longer in order to be sure that we’re pushing inflation back to the 2% target,” he said.

Minutes from the Nov. 1-2 gathering showed widespread support among officials for calibrating their moves, with a “substantial majority” agreeing it would soon time to slow the pace of rate increases. But views around how high they will eventually need to lift borrowing costs was less clear, with “various” policymakers seeing a case for going somewhat higher than expected.

Later on Monday, Fed Vice Chair Lael Brainard said US central bankers must lean against the risk of inflation expectations rising above the 2% target in a world where inflation may be less stable than in recent decades.

“In the presence of a protracted series of supply shocks and high inflation, it is important for monetary policy to take a risk-management posture to avoid the risk of inflation expectations drifting above target,” she said. “A drawn-out sequence of adverse supply shocks that has the cumulative effect of constraining potential output for an extended period is likely to call for monetary policy tightening to restore balance between demand and supply.”

The Fed said Brainard’s presentation was an updated version of June 24 comments made during a Bank for International Settlements conference in Basel, Switzerland.