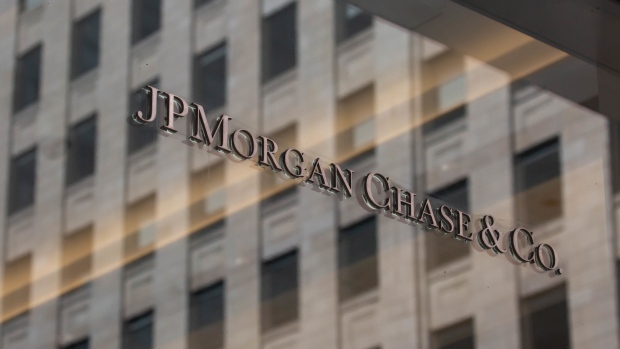 JPMorgan Chase & Co. signage outside the headquarters in New York, U.S., on Thursday, July 22, 2021. After a year of Zoom meetings and awkward virtual happy hours, New York's youngest aspiring financiers have returned to the offices of the city's investment banks, where they're making the most of the in-person mentoring and networking they've lacked during the pandemic. Photographer: Michael Nagle/Bloomberg , Bloomberg

(Bloomberg) -- Christopher Jordan was openly resentful of his colleagues on the JPMorgan Chase & Co. precious-metals desk for getting him fired. Now he’s facing a fraud trial just like them.

The former gold trader is accused of wire fraud and is set to appear in the same Chicago federal court where two former co-workers, Gregg Smith and Michael Nowak, were convicted in August. They were found guilty of manipulating markets with bogus “spoofing” orders at the world’s largest bullion bank. A third defendant, precious-metals salesman Jeffrey Ruffo, was acquitted.

Jordan’s trial starting Wednesday is part of a long crackdown by the US on market manipulation since the 2008 financial crisis. JPMorgan, the largest US bank, agreed to pay $920 million in 2020 to settle Justice Department spoofing allegations, by far the biggest fine by any financial institution.

Jordan placed thousands of orders for precious metals futures contracts “with the intent to cancel those orders before execution,” according to the indictment. Those moves allegedly misled others about prices and demand for precious metals, prosecutors said.

From 2006 to 2009, Jordan worked on the JPMorgan precious-metals desk run by Nowak. Jordan was the main spot gold and silver trader, but that changed after the bank acquired Bear Stearns Cos. in 2008, court filings show. Smith joined the desk from Bear Stearns and was given the primary responsibility for trading gold, by far the most important of the precious-metals markets.

Jordan was instructed not to trade gold, especially when Smith was in the market, and was relegated to the less important job of trading silver, prosecutors said. Jordan told colleagues he resented the demotion and he continued to trade gold anyway, court records show. Smith later accused Jordan of front-running a silver order ahead of a client’s gold order.

“There were a number of occasions where both Smith and Jordan were in the market at the same time, cross trading with one another and stepping on each other’s feet while trading the same products,” according to the FBI agent’s report of an interview with a government witness.

After an internal investigation by JPMorgan, Jordan was fired and subsequently joined Credit Suisse Group AG in 2010. In chat messages to colleagues and friends, Jordan didn’t hide his animosity.

“i know u guys r close so whatever, but to me hes a snake,” Jordan wrote in April 2010 about Smith in one chat.

“Every dog has his day, he will get his trust me, caught him red handed accusing me of front running blah, that’s how the whole thing went down, but trust me he better stay far away from me, and Ruffo too for that matter,” Jordan wrote.

In another chat, he wrote, Smith “is the worst, worse than the old days, seriously felt ill sitting near him,. i felt dirty”

Nowak and Smith, who have yet to be sentenced, were convicted of fraud, spoofing and market manipulation. They were acquitted of violating the Racketeer Influenced and Corrupt Organizations Act, prompting prosecutors to drop the RICO charge against Jordan. He now faces a single charge of wire fraud affecting a financial institution, which carries a 30-year maximum penalty if convicted.

Jordan is being tried separately for his alleged spoofing in precious-metals markets after a judge determined in April that certain Covid protocols would prevent the court from hosting a trial with more than three defendants.