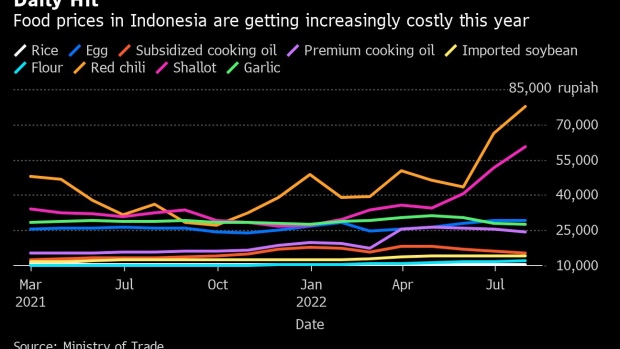 Shoppers in front of clothing stores inside Tanah Abang market in Jakarta, Indonesia, on Wednesday, March 30, 2022. Indonesians who have had their third vaccine shot don’t need to show a negative test result when traveling domestically during Ramadan and Eid period, according to Suharyanto, head of the Covid-19 task force. Photographer: Rony Zakaria/Bloomberg , Bloomberg

(Bloomberg) -- Indonesia’s central bank has stood out among its peers in its ability to keep interest rates at a record low, insisting that the spike in prices is supply-driven and short-lived.

But for ordinary Indonesians, everyday expenses like instant noodles and motorcycle taxis have been soaring -- and inflation looks like it may linger.

Febriana Tambunan, 27, who lives in a boarding house in Bogor, West Java, is feeling the pressure. Her weekly groceries budget of 100,000 rupiah ($6.79) no longer gets her as much onions, chili or eggs in the past months. She’s been limiting coffee takeouts and now walks home from work instead of taking motorcycle taxis to cut cost.

“I need to prepare more money for a plane ticket back home at the end of the year,” she said. “It looks like it’s going to be even more insanely expensive.”

Her experience is growing increasingly common in Southeast Asia’s largest economy where spending for subsidy has already doubled this year to cap fuel and power costs. Surging prices could stifle demand and derail the recovery momentum in a nation where household consumption is the main driver of economic growth.

Consumer sentiment dipped anew in July as Indonesians fretted over their incomes, jobs and big-ticket purchases. Retail sales grew just 4% in June, against the 15% expected by the central bank. The slowdown could worsen as prices are set to keep increasing.

Restaurants and malls are raising prices to pass on higher food and power costs. Retailers expect inflationary pressures to worsen over the next three to six months, while snacks giant PT Mayora Indah warned it would raise prices by an average of 8%.

Indonesia has also let airlines increase fares by 15%-25%, while minimum tariffs for the country’s ubiquitous motorcycle taxis or “ojeks” will go up by nearly half. Pertalite, the most widely used fuel, remains heavily subsidized but premium ones like Pertamax have seen prices jump about 39% this year.

Indonesia’s inflation fight is a familiar story. More than 100 central banks have hiked this year, with many of them promising more to come. Those monetary authorities pose a cautionary tale: it’s easy for policymakers to fall behind the curve once inflation takes hold.

What Mayonnaise Prices Teach Us About Measuring Inflation

Indonesia’s inflation was nearing 5% in July, its highest in seven years and breaching the central bank target of 2%-4%.

Yet Bank Indonesia has refrained from ringing the alarm, pointing to the more modest 2.9% core inflation print, which it said is a better gauge of price pressures. Governor Perry Warjiyo signaled earlier this month that the key rate could be held again next week.

“The challenge is that core CPI doesn’t fully capture the prices of everyday purchases such as transport costs and food that tend to be the natural basis for inflation expectations,” said Krystal Tan, an economist at Australia and New Zealand Banking Group Ltd.

“Rising inflation expectations in turn raise the risk of self-fulfilling inflation and a wage-price spiral that weighs on real incomes and growth over the longer term,” Tan said.

Bank Indonesia is shifting its attention to measures that could bust inflation at its source: local farms and markets. The central bank wants more chili seeds planted, greenhouses set up and better food distribution across the country.