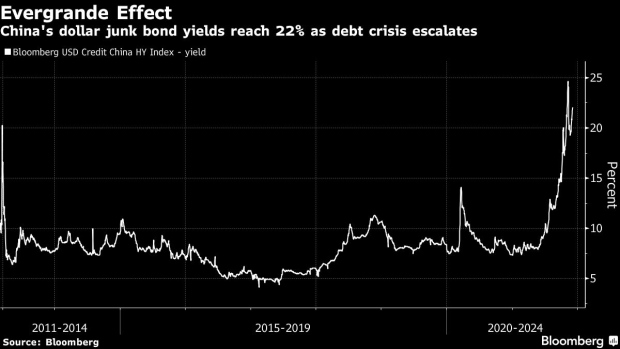 (Bloomberg) -- China Evergrande Group is planning to include all its offshore public bonds and private debt obligations in a restructuring that may rank among the nation’s biggest ever, people familiar with the matter said.

The plan would include public notes sold by Evergrande and unit Scenery Journey Ltd., according to the people, who asked not to be identified discussing private information. Grace periods for interest payments on two notes from Scenery Journey end Monday and could mark the firm’s first default on public debts.

The restructuring plan would also include about $260 million of notes issued by joint venture Jumbo Fortune Enterprises that Evergrande has guaranteed, one of the people said. Evergrande indicated in an exchange filing Friday that it may not be able to fulfill its pledge to guarantee payment on those securities.

The formal restructuring process has yet to begin and details of the plan could change, the people said.

Evergrande, Asia’s biggest issuer of dollar junk bonds, said on Friday that it will “actively engage” with offshore creditors on a restructuring plan. That was its most explicit acknowledgment yet that its $300 billion of liabilities have become unsustainable. But the brief statement left investors questioning whether the restructuring would include all its offshore debt. The firm is at the epicenter of a broader crisis in Chinese property debt sparked by a clampdown on excessive borrowing and real estate speculation.

There was no immediate response from Evergrande to a request for comment.

Evergrande has been reviewing its capital structure and has engaged in “ongoing dialogue with offshore creditors” since September, according to its filing on Friday.

The next step is for Evergrande advisors to initiate meetings with bondholders’ representatives, the people familiar with the matter said.