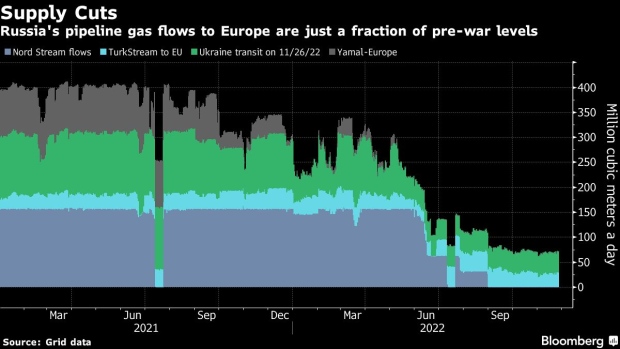 (Bloomberg) -- Natural gas prices in Europe fluctuated on Monday after Russia’s decision to continue flows via Ukraine, while weather forecasts point to cold temperatures ahead.

Benchmark futures pared losses after falling as much as 6.8%. Russia’s Gazprom PJSC announced early on Monday that it will not curb gas shipments to Moldova via Ukraine, as it had threatened, easing worries that it might eventually completely halt supplies in its last remaining active route to Europe.

At the same time, weather forecasts point to temperatures below seasonal norms across the continent over the next weeks, which could increase gas use for heating.

The continent is entering the winter season with reservoirs almost full after a huge effort to tap gas from across the globe to replace Russian supplies. But traders are keeping a close eye on the possibility that a cold snap combined with further supply curtailments could tighten the market, leading to a quick depletion of stocks in the coming months.

Libyan gas flows to Italy will be materially reduced and could potentially go to zero due to unplanned maintenance, Eni SpA said on Italy’s Gestore Mercati Energetici’s website on Monday.

Meanwhile, gas inventories will work as a buffer for the coldest days. European natural gas storage sites are 93.9% full, with some countries -- such as Germany -- almost completely full, according to Gas Infrastructure Europe.

“Germany could see a blip of cold weather in the coming weeks,” Michael Yip, an LNG analyst at BloombergNEF, said in a note. But full storage indicates “that the country could withstand the slight increase in gas demand.”

Benchmark Dutch front-month futures edged 0.4% higher at €125 a megawatt-hour at 4:49 p.m. in Amsterdam. UK day-ahead contracts surged as much as 87.6% on Monday -- the most in about three weeks -- driven by reduced flows from Norway and weak wind production that boosts the need for gas in power generation.