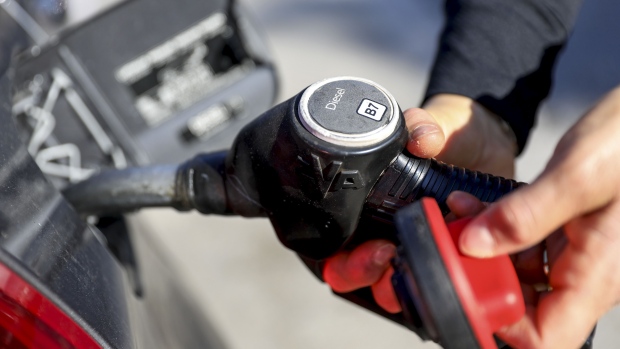 A customer fills up with diesel at a gas station in Rome, Italy, on Wednesday, March 9, 2022. Gasoline prices are surging across Europe with the war in Ukraine and threats to expand sanctions to energy raising questions about whether Russian supplies will keep flowing to market. , Bloomberg

(Bloomberg) -- Northwest Europe is forecast to begin a perilous winter with historically low amounts of diesel, a fuel that powers vast swaths of the economy.

The region’s stockpiles of road diesel, heating oil and other diesel-type fuel are set to shrivel this November to the lowest level in data that goes back to the start of 2011, according to Wood Mackenzie Ltd. That means there’s a smaller-than-usual supply cushion as the continent braces for a potentially severe winter energy crisis.

“We’re expecting stocks to draw at a seasonal rate, but we’re starting from this very low base,” said James Burleigh, the consultancy’s principal analyst of European oil markets, on why November inventories are expected to be so low. “On the demand side, we have the usual seasonal increase.”

Diesel is vital for cars and trucks in Europe, where its use has historically been financially encouraged. Such fuels are also consumed by ships, and used by the construction and manufacturing sectors. Stockpiles in independent storage in the Amsterdam-Rotterdam-Antwerp oil-trading hub are at the lowest level for the time of year since at least 2008, according to data from Insights Global.

Europe is structurally short of diesel-type fuel, regularly receiving cargoes from overseas. That natural shortage could become more of a problem early next year, when an EU ban on seaborne imports from Russia -- currently the continent’s single-biggest external supplier -- is set to take effect.

It’s just one part of a broader energy crisis that’s engulfed the continent following Russia’s invasion of Ukraine, sending the prices of natural gas and electricity soaring and fanning inflation.

See also: How the EU Will Allow a Slight Increase in Russian Oil Exports

Even now, a time of year when Europe’s stockpiles typically build, there are signs of supply constraints. Oil refiner OMV Germany reported a “run” on heating oil and diesel. Austria, Switzerland and Hungary have also said they will release oil from reserves in recent months.

Low water levels on the Rhine -- an important river for the shipment of fuels -- aren’t helping. When the water is shallow, barges are limited in how much they can load. That makes it harder to ship fuel into inland Europe from the continent’s oil trading hub. The measured depth at Kaub, a key waypoint on the waterway that lies to the west of Frankfurt, is forecast to drop to a critical 40 centimeter level on Friday, falling as low as 38cm later that day.

Part of the problem in building stockpiles is that it’s not being incentivized by the market. Currently, fuel for delivery in the winter months is pricing at a discount to the August diesel futures contract. This structure, known as backwardation, signals a tight market and discourages traders from putting fuel into storage tanks.

More recently, that structure has been fading, due to a combination of high refinery runs, healthy imports -- including Russian barrels still finding their way into Europe -- economic data and recessionary fears, according to industry analysts. Still, compared to historical norms, it remains strong.