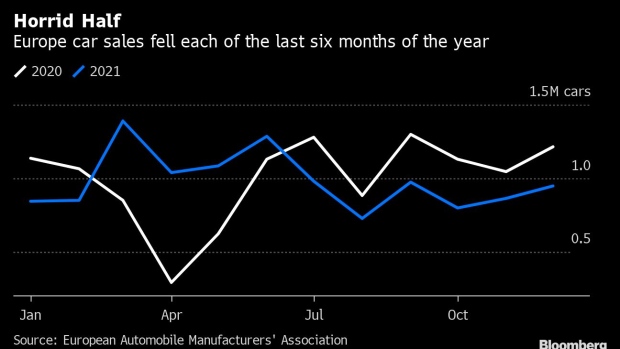 Germany led the decline in car sales with a 27% slump in December. , Bloomberg

Europe’s car sales slid during December for a sixth month of declines in a row, showing the extent of the uphill battle automakers are facing in the chip supply crisis.

After predicting for months that the dearth of chips disrupting the global industry would ease, automakers’ expectations have deteriorated. Sourcing enough semiconductors will remain arduous this year, and the pandemic continues to weigh on consumer confidence. Renault SA last week said the shortage, which cost the carmaker 500,000 vehicles in lost production last year, will peak during the first six month and then slowly improve as more capacity is added.

“Car sales in 2022 will prove just as challenging as in 2021,” said Peter Fuss, a partner with EY’s automotive team. “We still have the pandemic worldwide, as well as the wave of omicron in Europe, which continues to considerably restrict consumer behavior.”

Germany, Europe’s biggest car market, led the decline with a 27% slump in December, making the home of BMW AG and Volkswagen AG the only major country to record an annual drop. A resurging pandemic has forced the government to reintroduce a range of restrictions and the continent’s largest economy shrank as much as 1% during the final quarter of the year.

Even as more supply disruption looms, manufacturers are set to benefit from strong car prices as availability of both new and used vehicles stays restricted. Last year, most companies successfully shifted production to higher-end cars with strong profit margins to offset lower volumes.

“There is a clear mismatch between market activity and underlying demand,” analysts at LMC Automotive said in a report this month on Western European car sales. “Our baseline forecast assumes that the industry supply issues, dominated by the semiconductor shortages, will continue to disrupt the link between demand indicators and vehicle sales, though that impact will gradually ease as we move through 2022.”