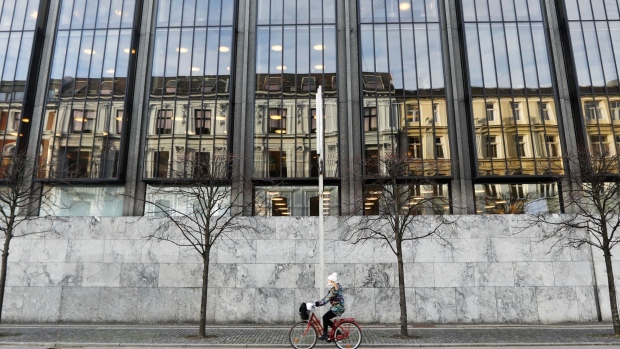 A cyclist passes Denmark's central bank, also know as Danmarks Nationalbank, in Copenhagen, Denmark, on Thursday, Jan. 3, 2019. For the first time in almost three years, the central bank of Denmark has bought kroner to support its euro peg through a direct intervention in the currency market. Photographer: Luke MacGregor/Bloomberg , Bloomberg

Denmark’s bank regulator asked the authorities to weigh in on the matter after the country’s consumer ombudsman said negative rates were illegal fees.

In a letter dated Jan. 13, the European Commission said it “leans” toward concluding rates aren’t fees and so they aren’t subject to “reasonableness” criteria. But it said a final interpretation of the Payment Account Directive must be made by the European Court of Justice, according to the letter, which was published by the Danish Financial Supervisory Authority on Monday.

Danish banks began assessing negative interest rates on retail customers in 2019, after years of absorbing the expense of a negative central bank rate. The practice, now common, triggered a backlash by angry customers and threats of action by the government.

Denmark adopted a sub-zero monetary policy back in 2012, to defend the krone’s peg to the euro.