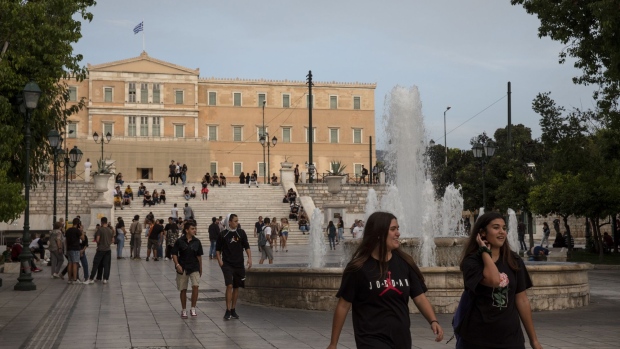 Pedestrians pass the fountain in front of the parliament building in Syntagma square in Athens, Greece, on Sunday, Oct. 4, 2020. Greece predicts the country’s primary deficit will fall to 1% in 2021 from a deficit of 6% in 2020, according to the government’s draft budget for next year. Photographer: Yorgos Karahalis/Bloomberg , Bloomberg

The European Commission is set to implement further debt relief measures for Greece after the country fulfilled its commitments during its last post-bailout review, according to an EU official.

Greece met the agreed conditions despite the economic fallout from the pandemic and Russia’s invasion of Ukraine, said the official, who asked not to be identified because the information isn’t yet public. The European Commission’s 14th enhanced surveillance report is due on Monday.

In a largely symbolic move that would mark the official end of Greece’s decade-long crisis, the country is also about to exit its strict regime of post-bailout monitoring by European Union institutions in August.

Euro-area finance ministers are expected to make the final decisions -- for both the release of the further debt relief measures and the termination of the enhanced surveillance program -- at a meeting in June.