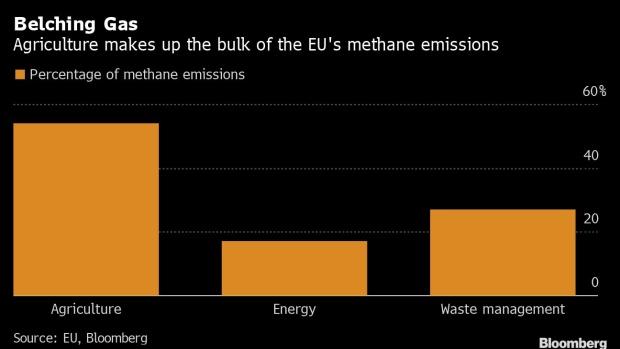 Cattle graze on dried grassland near Fulophaza, Hungary, on Tuesday, Aug. 2, 2022. Searing temperatures are shriveling corn crops across Europe, in the latest sign of a deepening crisis that spans everything from Rhine River transport to Spanish olive growers. , Bloomberg

(Bloomberg) -- The European Union must do more to achieve a 30% cut in its methane emissions by the end of the decade, highlighting the global scale of the task to mitigate one of the most potent greenhouse gases, according to a report from the bloc’s executive branch.

The bloc is currently on track to reduce methane emissions 23% by 2030 from 2020 levels, but it’s falling behind the Global Methane Pledge commitment undertaken by more than 100 countries at the COP26 climate conference in Glasgow last year, said the document sent to member states by the European Commission and seen by Bloomberg News.

While discharges of the gas -- which is 80 times more powerful than carbon dioxide over a 20-year horizon -- are falling by more than 30% in the energy and waste sectors, reductions in the agricultural sector are proving harder to abate, the document said.

“The sector with the largest remaining CH4 emissions in the EU, the agriculture sector, is also the sector where achieving further reductions is the most challenging, due to the high costs and the nature of involved biological processes,” according to the document, which is still subject to change. “With more than half of all methane emissions in the EU, achieving further reductions in this sector will be key.”

The report highlights the challenge the world faces in reducing methane emissions, given that the EU is one of the furthest along in taking steps to curb the gas. Beyond plugging gas leaks from pipelines and wells, it also shows that governments may have to take politically tough choices in agriculture if goals are to be achieved.

“In the medium to longer run, changes in dietary choices is another driver for reductions,” according to the report. “Additional action in the other sectors than agriculture would not be able to ensure the 30% ambition level of the Global Methane Pledge.”

The world received a stark reminder of the global warming effects of methane in recent weeks, with huge leaks in the Nord Stream gas pipelines connecting Russia and Germany discharging thousands of metric tons of the gas into the atmosphere as a result of suspected sabotage.

Still, that pales in comparison to the amount that is released globally into the atmosphere, with the oil and gas industry emitting an estimated 80 million metric tons of methane each year during production, processing and transport of the fuels, according to the International Energy Agency’s Methane Tracker.

Member states and the European Parliament are currently finalizing their positions on regulation that aims to step up monitoring and detection of leaks, as well as boost the transparency of emissions embedded in imports of energy. EU countries will have the chance to provide feedback on the report’s content, before it is finalized ahead of the COP27 summit in Egypt next month. The EU and the US are leading the Global Methane Pledge.