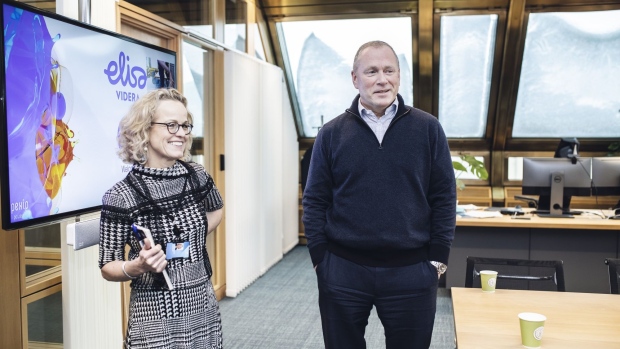 (Bloomberg) -- The chief executive of the world’s largest stock owner says life is about to get a lot harder for companies that fail environmental, social and governance tests set by institutional investors.

Nicolai Tangen, who runs Norges Bank Investment Management from Oslo, says the degree to which ESG dictates a company’s prospects is “starting to hit now.” Firms that don’t adapt face a world in which financing will dry up, insurance companies will walk away, employees will defect, social-media shaming will intensify and customers will disappear, he said in an interview.

As CEO of Norway’s wealth fund, Tangen oversees about $1 trillion worth of stocks, which represents roughly 72% of the total portfolio. The rest is in bonds, real estate and renewable energy infrastructure. The 55-year-old former hedge-fund boss has been looking after Norwegians’ collective savings since late 2020. And he’s promised Norway’s government he’ll turn the fund, which was built from the country’s fossil-fuel riches, into a global leader in responsible investing.

It’s a strategy that’s ultimately intended to make money, based on a view that ESG duds will become uninvestable. The next step for the fund is to speed up the pace of divestments based on ESG risks, according to its chief corporate governance officer, Carine Smith Ihenacho. Companies are dumped if the fund decides engagement isn’t worth the effort, a tactic that’s mostly applied to smaller stocks.

For bigger companies with low ESG scores, the investor says it’s about to apply a lot more pressure. Companies are sent so-called expectation documents which encompass everything from water use, to biodiversity to children’s rights. Firms that don’t score well against those requirements can expect to be grilled by the fund, with a view to a change of strategy. If that doesn’t work, an aggressive cycle of shareholder voting awaits.

“It’s based on the belief we have that in the longer run, if companies don’t manage their ESG challenges well, they’re not going to be profitable,” Ihenacho said. If they don’t improve, then the fund can “start to vote against, for example, a director who’s responsible for climate, or a board committee chair, or the chair of the board,” she said.

This year, Norway’s wealth fund didn’t back Exxon Corp. CEO Darren Woods continuing as chairman, and demanded that the oil giant be transparent around political contributions, in an effort to stop the kind of corporate lobbying that leads to dubious climate policies.

The investor also backed a successful proposal that Chevron Corp.’s emissions targets include Scope 3, which is the broadest definition and covers the carbon footprint of its customers. And Ihenacho says the fund is now stepping up pressure on companies that can’t explain their taxation models.

It’s a strategy the fund says is more powerful than outright divestment. “If we just sold out right away, it wouldn’t solve the problem of getting towards 1.5 degrees,” Ihenacho said, referring to the critical planetary warming limit identified by scientists.

Tangen characterizes divestment as a cop-out. “You have two camps,” he said. “One sees a problem, and just runs away. We think that approach doesn’t make much sense, because you don’t solve any problems. Somebody needs to own these companies. We think it’s better that we try to constructively move them in the right direction.”

The debate around ESG divestment versus engagement is increasingly attracting academic research. A study earlier this year showed that funding costs for companies that pollute hardly change when they’re divested, indicating that portfolio allocation ultimately does little to correct unethical behavior in the corporate world.

Authors Jonathan Berk (Stanford Graduate School of Business) and Jules Van Binsbergen (Wharton School) wrote that “given the current levels of socially conscious capital, a more effective strategy to put that capital to use is to follow a policy of engagement.”

Other studies suggest that both strategies can go hand in hand. Divestment as well as thematic and integrated strategies “have potential to help in their own way,” according to research by Jonathan Harris, director of Total Portfolio Project and an associate researcher at EDHEC-Risk.

Tangen says engagement works most of the time. “There are very few companies that don’t respond,” he said. And those that resist change face a bleak future, he said.

And then there’s the impact of social media, which has the power to sway customer behavior, he said. “You’re not going to get any clients...if you are not sustainable.”