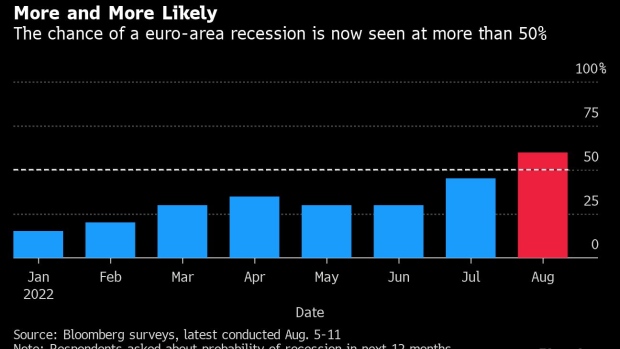 A pedestrian crosses the empty courtyard outside Louvre Museum during morning rush hour in Paris, France, on Monday, Nov. 2, 2020. Europe’s economic recovery is being cut short as governments implement new restrictions to fight the coronavirus that risk driving the region toward another recession. Photographer: Nathan Laine/Bloomberg , Bloomberg

(Bloomberg) -- The risk of a euro-area recession has reached the highest level since November 2020 as energy shortages threaten to drive already record inflation higher still, according to economists polled by Bloomberg.

The probability of output shrinking for two straight quarters has risen to 60% from 45% in a previous survey, and up from 20% before Russia invaded Ukraine. Germany, the bloc’s largest economy and one of the most exposed to cutbacks in Russian natural gas supplies, is likely to stagnate from as early as this quarter.

The rising cost of living is hurting euro-area companies and households, with Russia’s energy threats exacerbating that problem heading into the final months of 2022. In addition, supply bottlenecks are being worsened by severe droughts, which have led to falling water levels across Europe’s rivers this summer.

Inflation is now expected to average almost 8% in 2022 -- about four times the European Central Bank’s goal -- and 4% next year. Respondents still see it slowing to the 2% target in 2024, however.

Economists see the ECB raising interest rates by a half-point in September -- as it did in its initial move in July. That would bring the deposit rate to 1% by year-end, with a quarter-point hike expected next March.