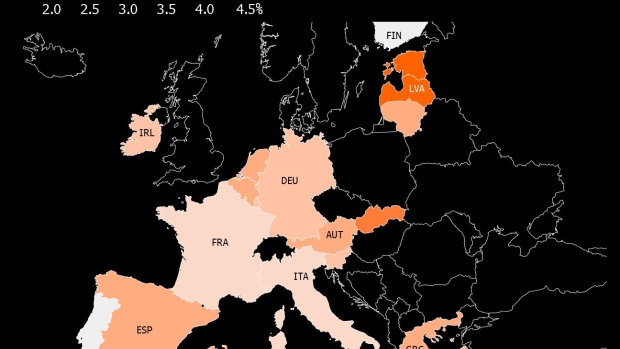 (Bloomberg) -- The European Central Bank’s insistence that surging consumer prices won’t endure is being tested so repeatedly that inflation now threatens to overshadow a meeting in two weeks time to revamp pandemic stimulus.

That decision was meant to ease the path away from emergency bond-buying while reassuring investors that support won’t be abruptly removed. Instead, President Christine Lagarde may find the focus has switched to when the ECB may tighten monetary policy, just as other major central banks signal they’ll need to act to curb inflation.

She and her colleagues have insisted soaring prices are fueled by temporary factors such as energy costs that will soon start to fade. In contrast, Federal Reserve Chair Jerome Powell enacted a hawkish pivot on Tuesday, suggesting the word “transitory” should no longer be used to describe what’s happening.

Hours earlier, euro-zone inflation exceeded all forecasts to reach 4.9%, with a core gauge stripping out volatile components also at a record for the era of the single currency. Meanwhile, the omicron coronavirus variant is feeding fears of further price-stoking supply bottlenecks, even before scientists determine its health risks.

“Lagarde’s insistence that inflation is a temporary phenomenon is under severe strain,” said Steen Jakobsen, chief investment officer at Saxo Bank. “The political pressure on the ECB to act is ratcheting higher.”

That pressure is on full view in Germany, the region’s largest and probably most inflation-averse economy, where price growth is outstripping the euro region. If it doesn’t ease as expected, “we have to do something,” Chancellor-designate Olaf Scholz told Bild TV in an interview, without specifying what any action may entail.

In the wake of price data this week, money markets have raised bets on the ECB tightening monetary policy, wagering the deposit rate will be lifted by 10 basis points by end-2022, compared with 5 points on Monday.

While the ECB acknowledges inflation will take longer than originally expected to dip back below its 2% target, it maintains that action isn’t needed for now, and argues that Europe is in a different position to the U.S.

About four-fifths of the region’s price pressures reflect shocks generated abroad, Executive Board member Fabio Panetta said in a recent speech. Spending on services remains well below pre-crisis levels, durable-goods consumption is showing “nothing like the boom” seen in the U.S. and core inflation is much lower too, he said.

“The ECB can afford to wait much longer than the Fed to confirm that we’re moving in the same direction,” said Anatoli Annenkov, an economist at Societe Generale in London. “Should we see inflation accelerating more sustainably -- with real evidence of wage pressures -- that’s when the ECB would need to start worrying.”

The latest bargaining rounds on salaries don’t offer particular reason for concern. Germany’s second-largest union won a 2.8% raise this week in a deal that will affect about 3.5 million people.

Indeed, central bankers should hold their nerve as they watch the global economic recovery slowing and a stronger and longer-than-expected bout of elevated inflation cast a shadow over the outlook, the OECD said Wednesday in a report.

Omicron, however, may pose the greatest uncertainty. There are fears it will tilt consumers further toward goods purchases and away from services, potentially worsening supply snarls and boosting prices.

“There’s a risk that inflation will not go down as quickly and as much as we predicted,” Lagarde’s deputy, Vice President Luis de Guindos, told French newspaper Les Echos in an interview published Tuesday.

A week earlier, before the discovery of the new strain jolted global markets, his Executive Board colleague Isabel Schnabel suggested the price outlook was shifting by describing risks as “skewed to the upside.”

Before omicron’s heath dangers are fully understood, it’s Powell’s pivot in testimony to Congress that’s most likely to put the ECB on the spot.

At their December meeting, policy makers are set to determine the future course of bond-buying following the scheduled end of its pandemic program in March. That judgment was seen as tricky and controversial even before the latest developments.

If inflation is strong enough to change the mind of the world’s most powerful central bank, investors may expect the ECB to follow suit. The task of Lagarde, who’s struggled to snuff out market bets for an interest-rate hike in 2022, may have just got harder.