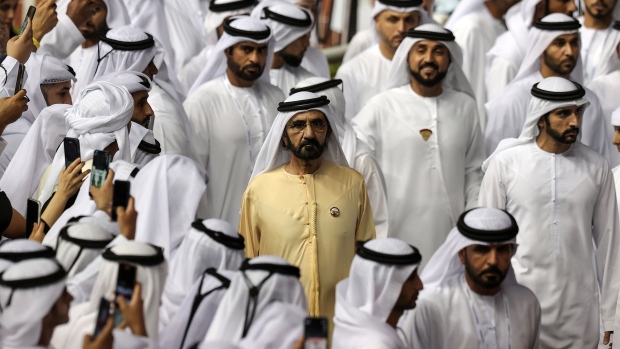 Dubai’s ruler is set to become the second-largest shareholder in Emaar Properties PJSC as part of a 7.5 billion dirham ($2 billion) deal that will hand the real estate firm full control of a key development in the city.

The deal will make Sheikh Mohammed Emaar’s second-biggest investor, according to the statement, though it wasn’t immediately clear how many shares will be issued or the total stake Dubai Holding will hold. Dubai already owns a 24% stake in Emaar -- which is the developer of the world’s tallest tower, Burj Khalifa.

Shares in Emaar closed down 1.6% on Friday. The stock has almost tripled from a March 2020 low and is up about 15% so far this year.

Dubai is getting its financial house in order with a string of asset sales and initial public offerings of state-owned companies that aim to raise funds just as borrowing costs surge across the world. Authorities are also seeking to stem a glut of properties that’s plagued the emirate’s real estate market for years.

The Dubai Creek Harbor deal is the latest in a series of asset sales by the state-backed conglomerate. In 2019, Dubai Holding unit Meraas set up a $1.4 billion joint venture with Brookfield Asset Management Inc., giving the Canadian firm a degree of control of some of the city’s most prized retail assets. Dubai Holding is also behind Tecom Group, which in June raised $454 million in an initial public offering.

Emaar had suspended construction of parts of the Dubai Creek Harbour project when the coronavirus outbreak dampened demand. In recent months, the city’s property market has rebounded strongly, helped by factors including an increase in Russian buyers looking to safeguard their wealth and Dubai’s nimble handling of the pandemic.

Raj Purswani, a senior research analyst at International Securities LLC, said some investors may view the deal negatively due to concerns about dilution and the developer’s commitment to dividends.

“Cash, which could have been used to repay debt, considering the rising interest cost, will now be used to buy the project,” he said. It “will also reduce available free-float in the market, which will reduce Emaar’s weight in the future calculation of MSCI and FTSE indices.”

Others say the acquisition will benefit Emaar in the long term. It will give the developer a large land bank to build on in its strongest market along with full control of the project and its profit, according to Mohammed Ali Yasin, an Abu Dhabi-based, independent capital markets advisor and investor. “In the future, that should help lift Emaar’s share price,” he said.

Rothschild & Co. acted as sole financial adviser to Dubai Holding on the transaction.