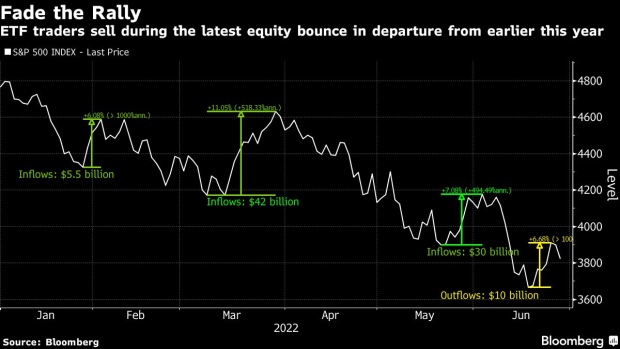 A trader on the floor of the New York Stock Exchange (NYSE) in New York, U.S., on Monday, June 27, 2022. Money managers betting on a sustained global rebound will be left sorely disappointed in the second half of this crushing year as a protracted bear market looms, even if inflation cools. Photographer: Michael Nagle/Bloomberg , Bloomberg

(Bloomberg) -- Stock dip-buyers across the ETF world have vanished after seeing their account balances ravaged too many times in the 2022 meltdown.

Three times, to be specific. That’s the number of 5% bounces that have failed to endure in the S&P 500 this year -- luring billions of dollars to exchange-traded funds in every rebound. Not this time.

As the S&P 500 jumped more than 6% through Friday from its 2022 trough, roughly $10 billion was pulled out of equity funds, data compiled by Bloomberg show.

The bearishness has proved prescient this week as the selloff resumed in earnest, with the S&P 500 sinking 2% on Tuesday.

The outflows add to evidence that investor sentiment is souring after the once-successful strategy of buying the dip cratered.

At some point in the last two weeks, hedge funds tracked by Morgan Stanley slashed their equity exposure to the lowest level since 2009. Meanwhile, retail investors gave up on their long-held bullish stance, selling shares at the fastest pace in almost two years.

All the bearishness may eventually set the stage for what contrarians view as a sustained recovery. But for now, it reflects growing trepidation that any bounce is nothing but a bear-market rally, with the Federal Reserve committing to the most aggressive tightening cycle in decades to fight red-hot inflation.

“Buy-the-dips is a good strategy when the Fed is easing and injecting liquidity into markets,” David Donabedian, chief investment officer of CIBC Private Wealth Management, said in an interview. “Sell-the-rallies is a better trading strategy in a Fed-tightening mode. I don’t think we’ve seen the lows of this bear market yet.”

Technology megacaps bore the brunt of the selling on Tuesday. Down more than 20% from its January peak, the S&P 500 is stuck in its second bear market since 2020. The Nasdaq 100 tumbled more than 3% Tuesday, extending its 2022 loss to 29%.

The lack of inflows into stock ETFs of late is a notable departure from May, when traders poured $30 billion into the funds during a 7% market bounce. A similar recovery in March saw inflows amounting to $42 billion, while another in January was met with addition of more than $5 billion.

All these attempts of bottom-fishing proved futile as the S&P 500 reversed its course, hitting fresh lows one after another along the way. Now the stock-market bottom feeders have dodged this latest slump by selling the recent rip.

“Investors are increasingly worried about a recession, and are dusting off their bear-case scenarios,” said Dan Suzuki, deputy chief investment officer at Richard Bernstein Advisors. “There’s also been a reassessment of the Fed. Right or wrong, there’s an increasing narrative that the market is going to reign in inflation at all costs, growth be damned.”