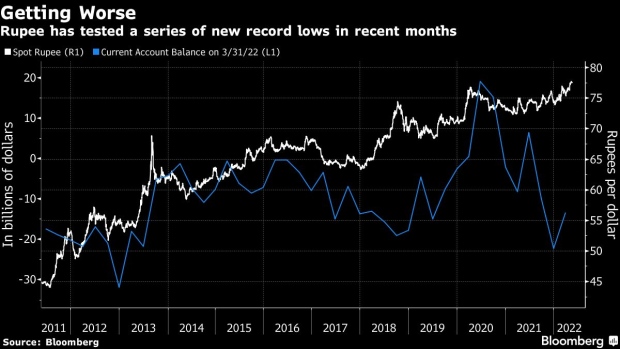 A pedestrian walks past a currency exchange shop in Mumbai, India, on Thursday, June 28, 2018. The Indian rupee slumped to an all-time low as a resurgence in crude prices and the emerging-market selloff took a toll on the currency of the world's third-biggest oil consumer. Photographer: Dhiraj Singh/Bloomberg , Bloomberg

(Bloomberg) -- Traders in India’s foreign-exchange market are bracing for more instances of dollar shortages, as record outflows from the nation’s equities and deteriorating external finances bite.

Some Mumbai-based banks saw a dollar crunch last week, as outflows from Indian assets add to the pressure, according to Mizuho Bank Ltd. and IFA Global. The rupee dropped to a record low against the greenback on Tuesday.

Foreign investors have pulled $28 billion from Indian equities this year, while higher oil import costs and a widening current account deficit mean that everybody from investors to companies are demanding dollar for their rupee at the same time. The Reserve Bank of India said last Friday it’s trying to meet the demand through its reserves.

“The shortage of cash dollars and lower forward premia could become self-perpetuating for the rupee,” said Madhavi Arora, lead economist at Emkay Global Financial Services Ltd. “These factors could pressurize spot rupee, further compounded by exporters also holding on to their earnings in anticipation of a further rupee slide,” she said.

The rupee has declined 5.6% this year, hitting a low of 78.8613 a dollar on Tuesday. The RBI has been seeking to smooth out the decline, as rate hikes by the Federal Reserve pull capital away from emerging markets, though its efforts may be contributing to the dollar shortage.

The RBI has recently ramped up intervention in the forward markets to slow the rupee’s drop, a strategy that sees it run down its forward-dollar book instead of spending much reserves in the spot market. That has led to annualized one-year dollar-rupee premium dropping below 3% last week, its lowest in more than a decade.

That, however, spurs importers to buy dollars in the forward markets, contributing to a shortage of the greenback. A central bank spokesperson didn’t immediately respond to an emailed request for comment.

“An organic cash dollar shortage emerges from the likelihood of a balance of payments deficit in FY23,” said Vivek Kumar, economist at QuantEco Research. “Under normal circumstances, this ought to have been met by the central bank supplying dollars in the market by drawing down its reserves. However, the use of buy/sell swaps by the RBI could potentially accentuate the shortage amidst importers getting incentivized to increase their hedge ratios.”

Foreign currency reserves held by the RBI have dropped to $590 billion, according to data released last Friday, down about $40 billion from the start of the year. It may have spent about $15 billion in the forwards market since April, according to DBS Bank Ltd.

The rupee may continue to remain under pressure amid deteriorating external finances and risk-off sentiment, according to strategists at Goldman Sachs Group Inc., who see India’s balance of payments deficit at $40 billion in 2022, compared with a surplus of $55 billion 2021.