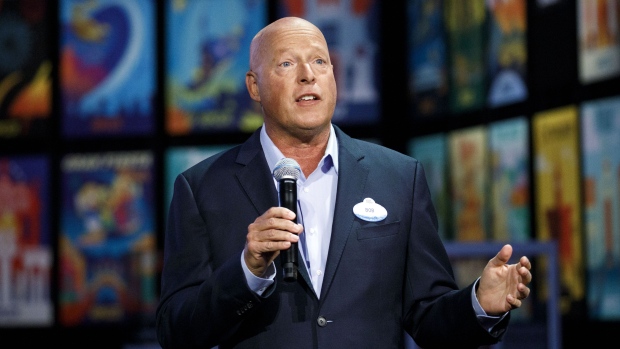 Bob Chapek, chairman of Walt Disney Parks and Experiences, speaks during a media preview of the D23 Expo 2019 in Anaheim, California, U.S., on Thursday, Aug. 22, 2019. , Bloomberg

Walt Disney Co. Chief Executive Officer Bob Chapek said he believes there have been fundamental changes in people’s attitudes toward moviegoing, trends that will probably continue after the global pandemic passes.

“The consumer is probably more impatient than they’ve ever been before, particularly since now they’ve had the luxury of an entire year of getting titles at home pretty much when they want them,” Chapek said Monday at a Morgan Stanley media and technology conference. “I’m not sure there’s going back.”

The remarks are particularly notable coming from Disney, a company that dominated the box office before the pandemic. Chapek, who spent a good part of his early career at Disney’s home-entertainment division, said he will continue to experiment with offering films online for purchase -- or moving them more quickly to streaming services.

“We certainly don’t want to do anything like cut the legs off a theatrical exhibition run,” Chapek said. But the old approach -- where a movie could be out of theaters and still not available for home viewing -- isn’t viable anymore, he said.

“We like to let the consumer be our guide in almost all situations,” he said. “I don’t think there’ll be the tolerance for a title being out of theatrical for months and yet it hasn’t had its chance for it to be thrown into the marketplace in another distribution channel.”

Disney had the largest market share of any film distributor in 2019, before the COVID-19 crisis prompted theaters around the world to close. Even as cinemas begin to reopen, filmgoers have been slow to return.

Disney and other Hollywood studios have held back on debuting some of their biggest films on the big screen. In some cases, they’ve released them directly to consumers on streaming services or made them available for purchase online.

Chapek has made a big push into streaming TV, increasing investment in original content and consolidating Disney’s media businesses to get them all aligned with how consumers want to watch programs. He said any new sports rights deals, including one he’s negotiating with the National Football League, will include content for the company’s ESPN+ streaming service. Chapek said he would approach those negotiations with “discipline.”

The executive said he’s “very pleased,” meanwhile, with the launch of a new Star-branded channel on the company’s Disney+ service in Europe, which came with a two-euro price increase.

The Indiana native took over the world’s largest entertainment company a year ago, just as the coronavirus began its spread across the world. He said the pandemic will also change how Disney operates its theme parks, which have been closed or operating at reduced capacity due to the virus.

New technologies such as keyless check-in at hotels and mobile food ordering have accelerated during the pandemic and will remain a feature of the parks going forward. Disney also recently ended its annual pass program at its original Disneyland resort in California. That move, which may help relieve overcrowding when the park reopens, is something the company couldn’t have done without the Covid shutdown, he said.

“This is the perfect time to make operational changes,” he said.